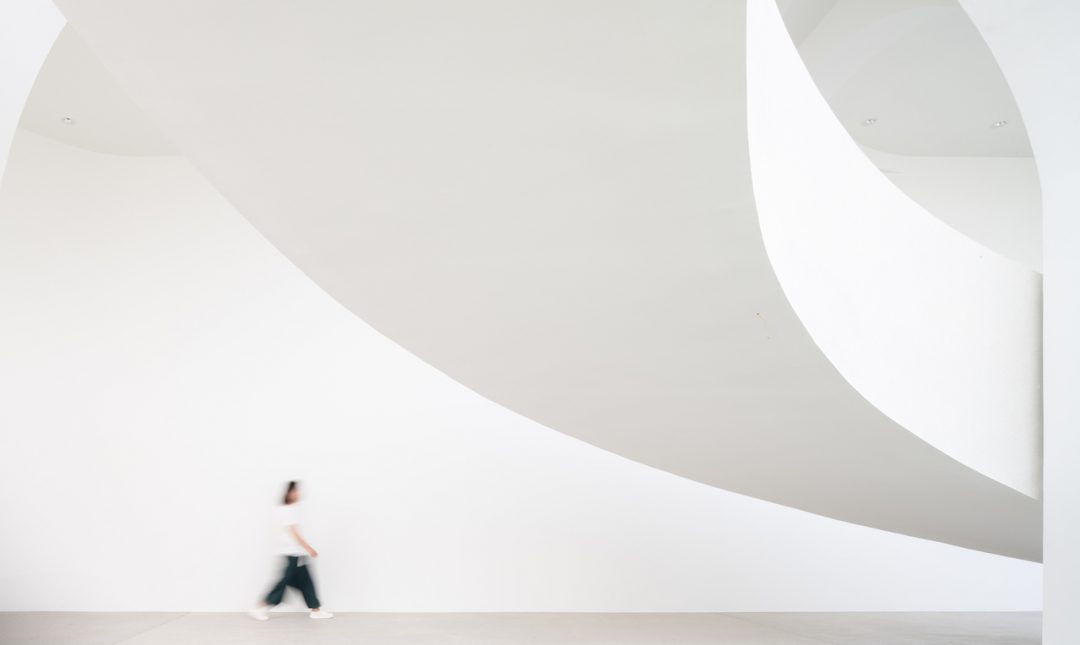 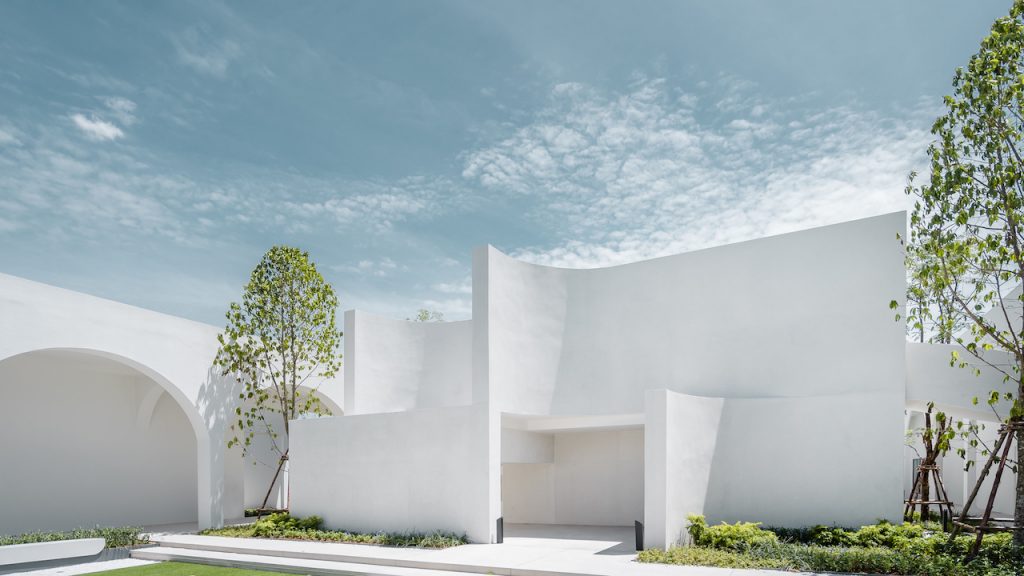 One of the unique Thai traditional customs is the Khan Maak, a pre-engagement procession, traditionally outside the bride’s house, where the groom and party must pass through ‘golden’ or ‘silver gates’ (string barriers held by the bridal party) in order to reach the bride. 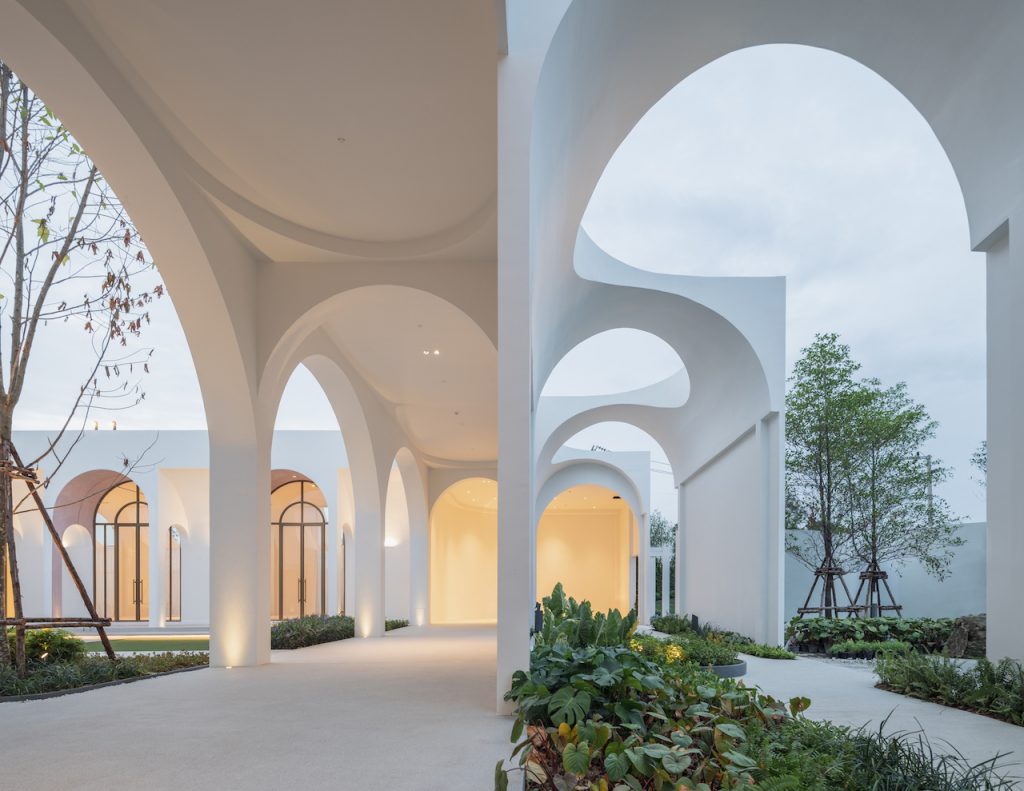 The boldest design element of Aube is the Khan Maak walkway running along the western edge of the building and eventually ending in the engagement room. Here, this procession is given its own space, while retaining its traditional outdoor location. 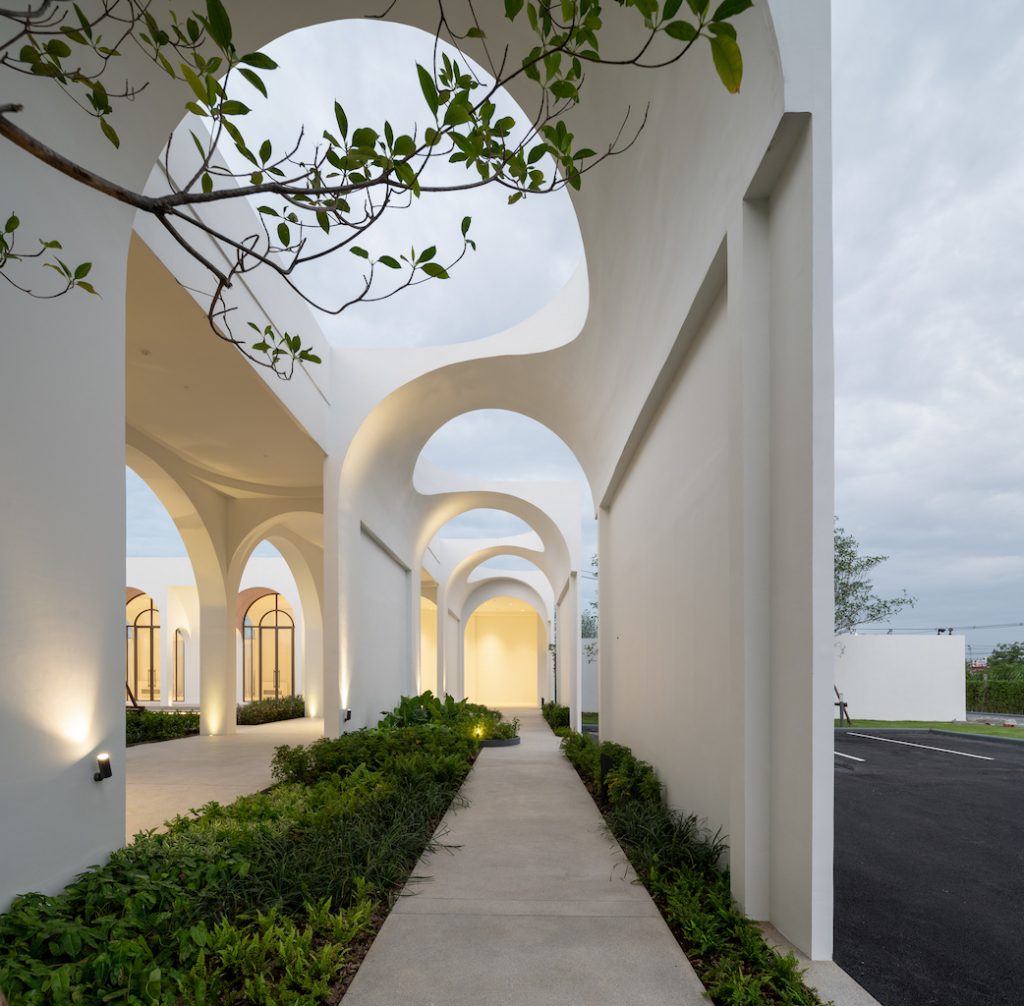 The walkway is a reinterpretation of the village street where the groom and his party can be seen by neighbours viewing from their houses. The sense of movement is heightened by the screening of some spaces between columns to hide the view of the procession from the exterior. 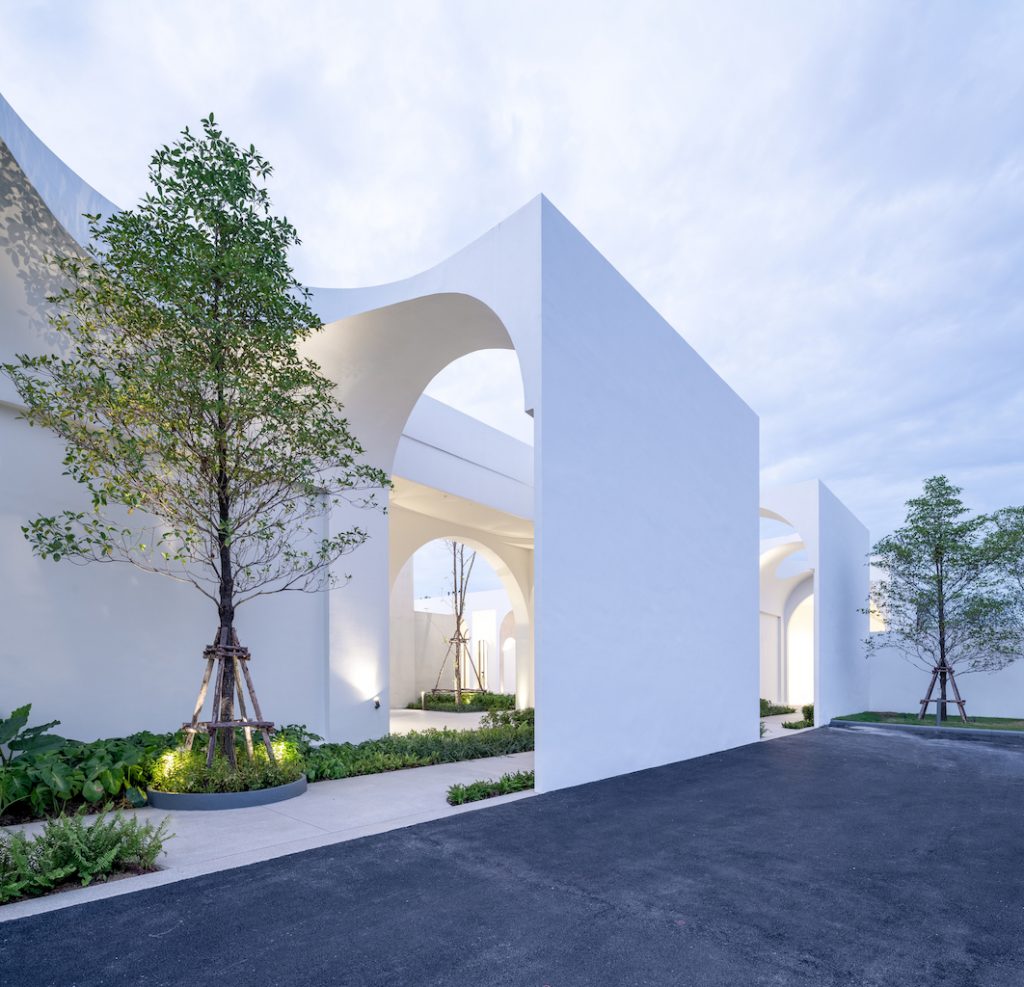 As Thailand has a history of borrowing and mixing cultures, both old and new, Thai weddings use variations on the Khan Maak with Chinese elements, along with components of western weddings. A purpose-built wedding space must, therefore, be flexible to accommodate a variety of religions and cultures either in their pure form or with elements borrowed from other traditions. Nowadays, weddings in Thailand have become an opportunity for photographing the event as much as the event itself. 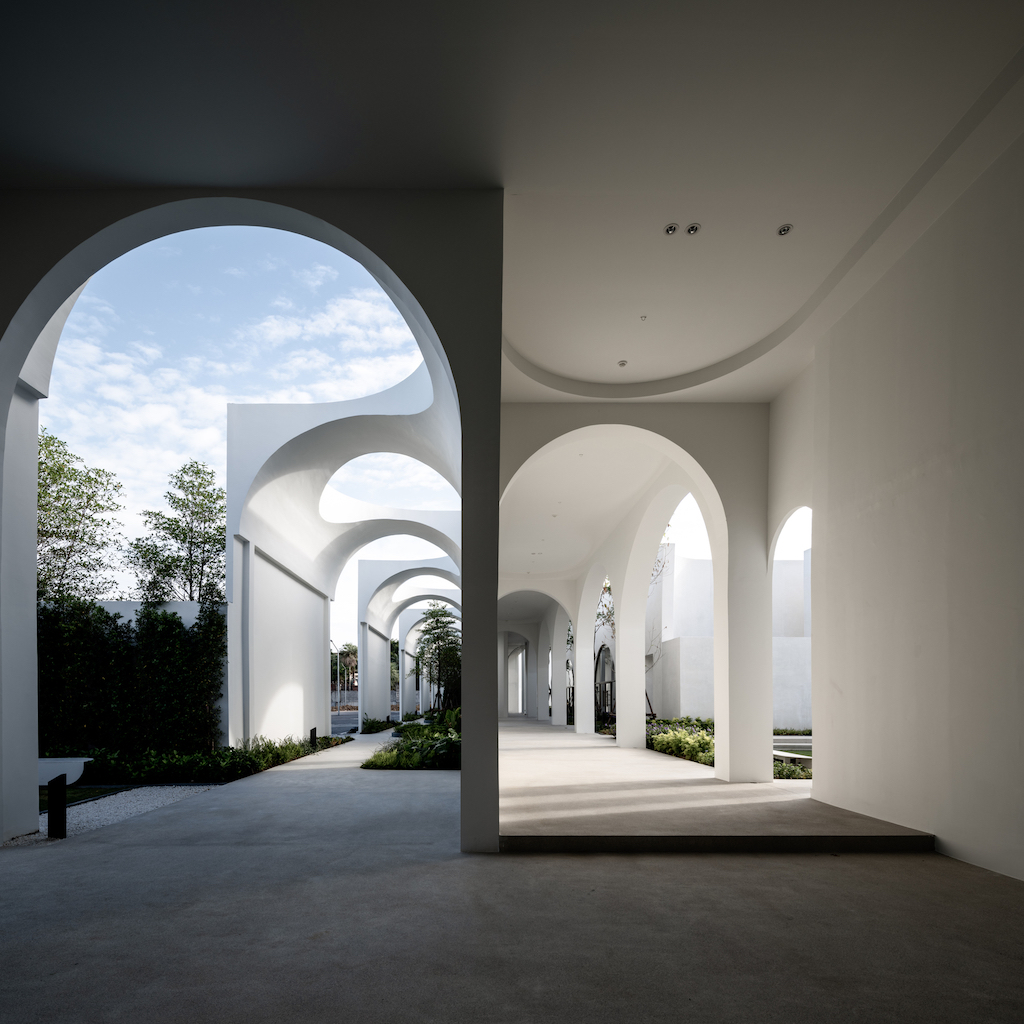 The building tries to reconcile this attitude by balancing between being a stage for the photography and space that enhances an authentic experience. Use of white curved walls has the practical advantage of mimicking the walls of a photographic studio to be used either as a blank canvas, aided by diffused light from the skylights, or with the play of light and shadows formed by the curved geometry on the external walls. 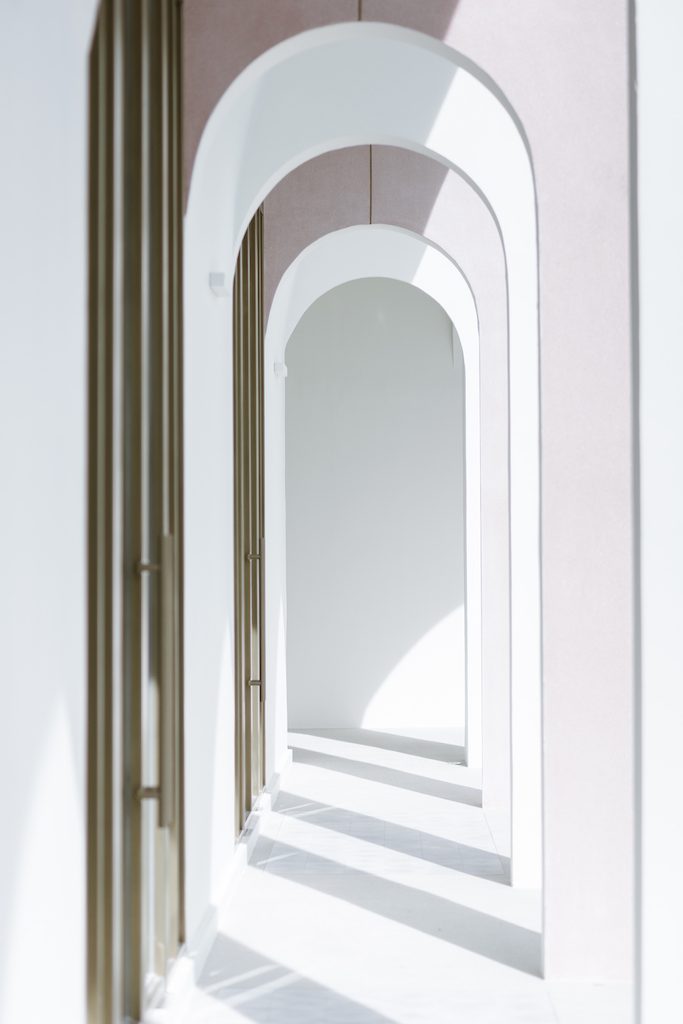 The theme of the arch and the curved wall is repeated inside the building in various forms, including the sculptural staircase in the courtyard, from where the bride throws her bouquet. The arches forming both the exterior wall of the main hall and the cloistered structure overlap each other, again creating a feeling of movement. 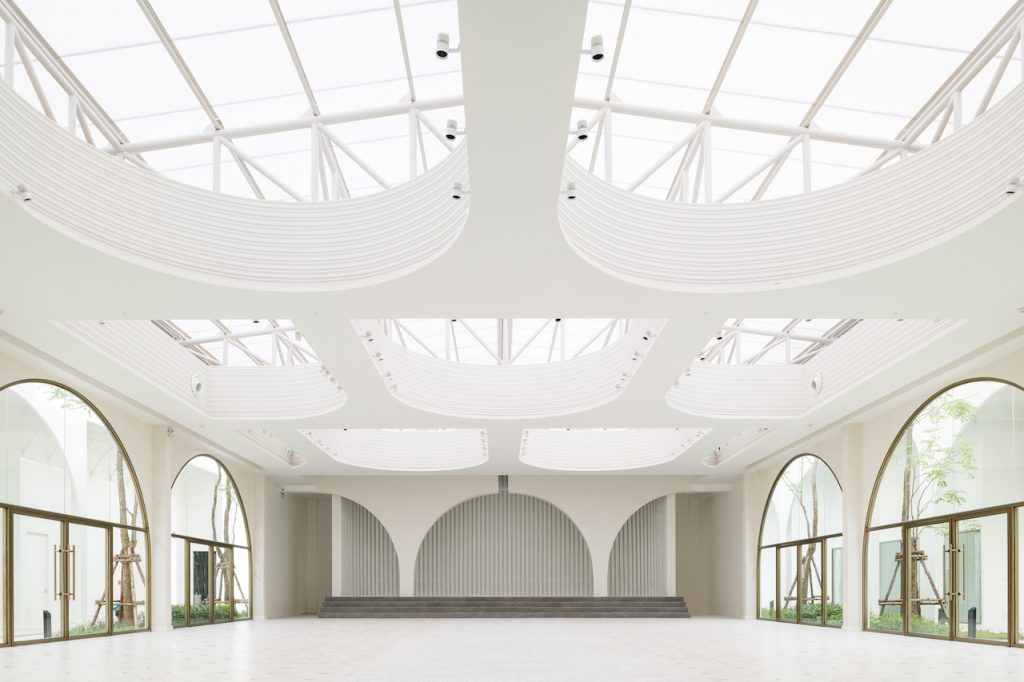 The curves are scaled down in the cornice of the arch-shaped skylights in the ceiling of the main hall and this cornicing element is re-appropriated as the finish to the wall behind the stage. Curved walls and cut-outs, along with soft curtains, create a memorable and contemporary space, which is indicated in the building’s name, Aube, meaning “hug”. 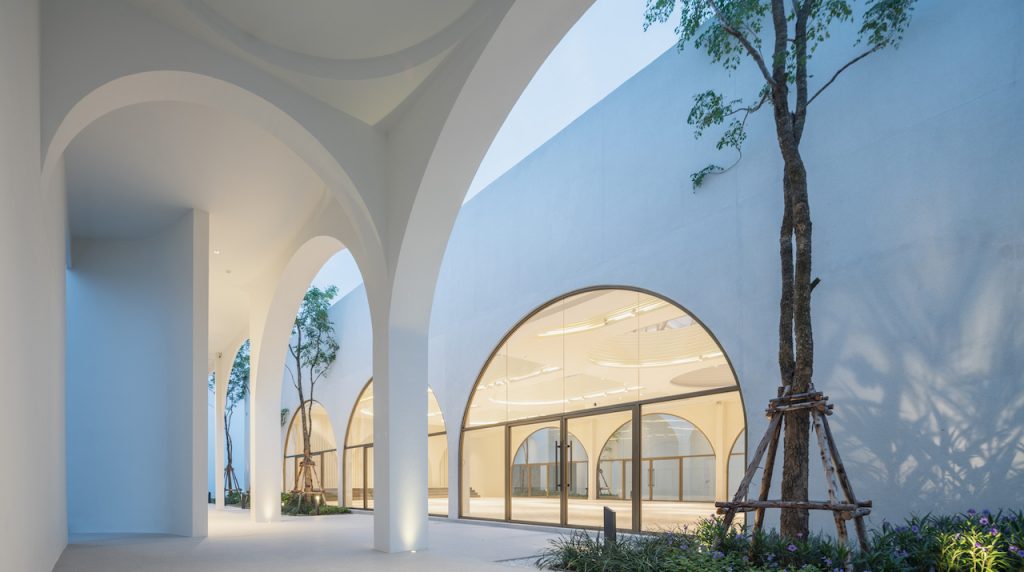 The location in suburban Bangkok has necessitated the low-rise scale and the overall layout of being a self-contained, introspective building. Upon arrival, guests wait in a gallery space displaying photographs of the couple. Literally a green room, this space acts as a transition from the outside world. The two main internal spaces are the main (wedding) hall and engagement hall. 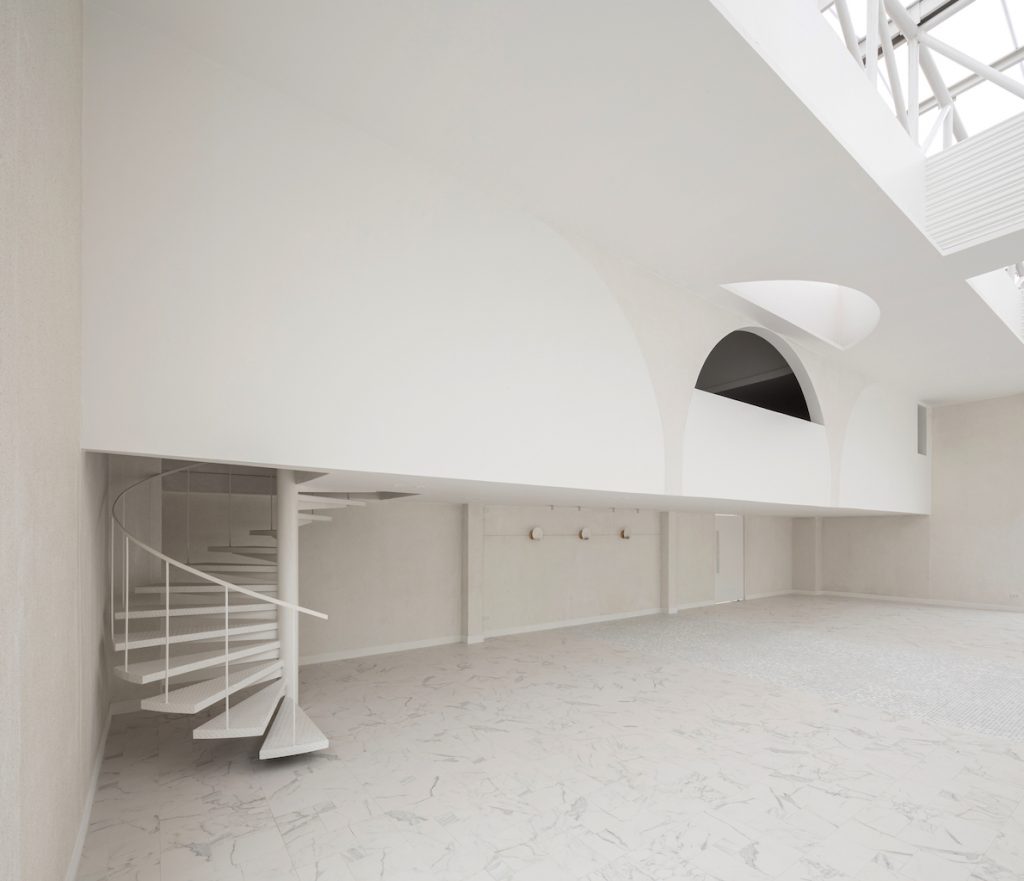 The main hall holds 290 people and sits free-standing in a courtyard surrounded on three sides by a U-shaped cloistered structure which allows for under-cover circulation and the inclusion of auxiliary rooms. The engagement hall holds 150 people and is separated from the main hall by the “bouquet throwing” courtyard. 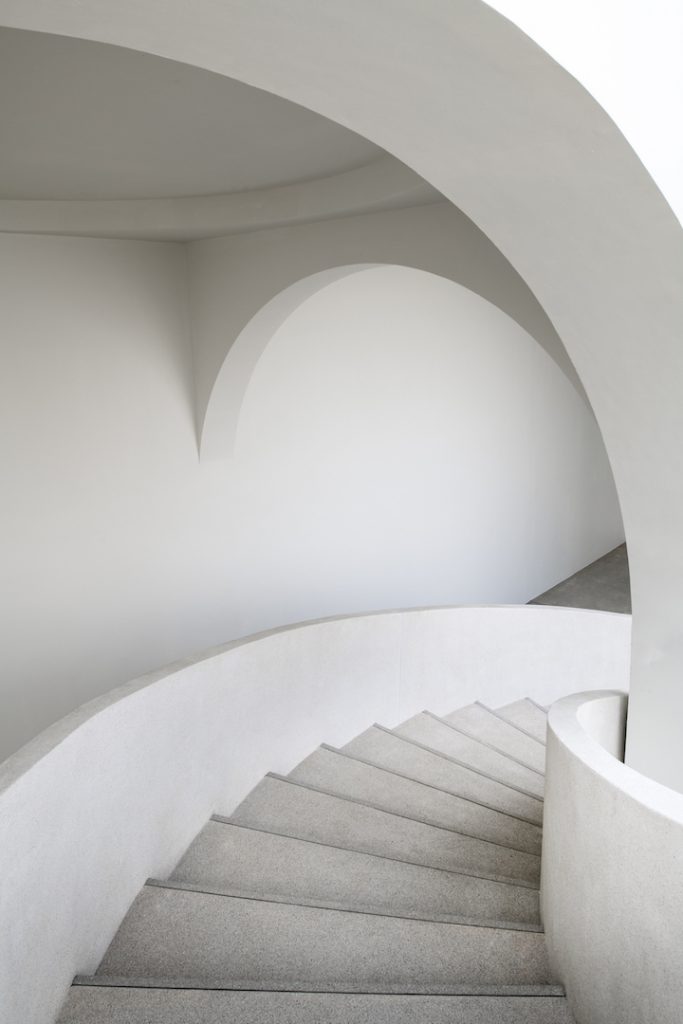 The Khan Maak walkway and cloistered courtyard could have simply been a copy of an arched walkway, or a reinterpretation of a church element. However, arches are deconstructed to half-arch modular elements and reformed after rotating on different axes, clearly giving the building a modern image, open to interpretation. The effect is a snaking ceiling of white concrete. 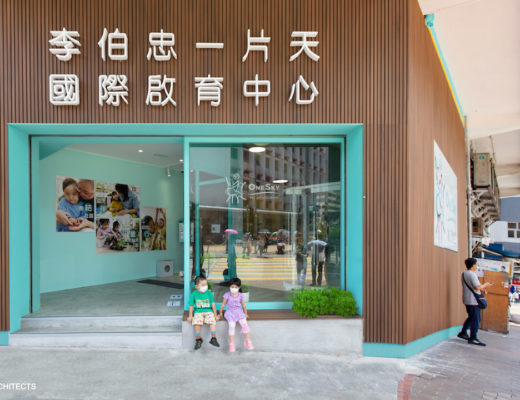