Bangkok-based architecture practice Ayutt and Associates Design (AAd), with projects across Southeast Asia, has completed a residential project called the Monsoon House in Trat, the easternmost province of Thailand, Trat.

The 1,500m² project, built on a limited budget, is a private, peaceful residence located on the coastline of the Thai Gulf known for its smooth sandy ground, embedded amid the rubber plantation. The picturesque location, a mere steps away from the sea, the house reflects the firm’s modernist tropical approach. Here, the team of architects has attempted to address the issue of vanishing regional style.

To minimise the monsoon’s impact on the building and landscape, the AAd team did extensive research on weathering protection, as well as coastal erosion and residential privacy. The language and logic of the house have been designed in response to the wind loads and storm protection as its location, Trat, is known to be one of the wettest provinces in the country. The architects demonstrate a true understanding of the topography of the locus and did not wish to disturb the coastal nature, which is why the house compositions are found on a horizontal plane in order to compensate for the strong wind. 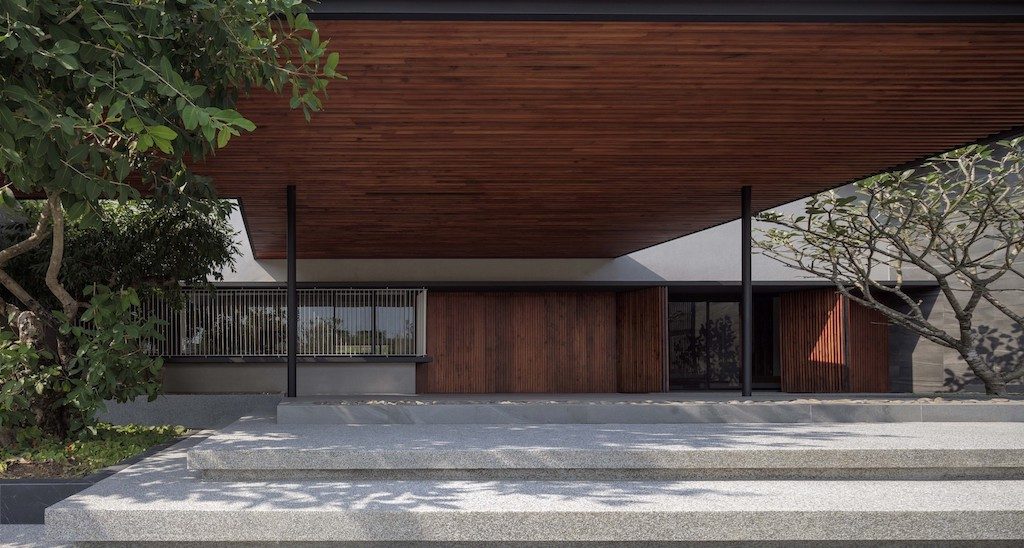 While the house is treated as a refined tropical modern work, it also respectively responds to regional climatic conditions, which is hot and humid year-round, and demonstrates the creative use of modern materials such as aluminium cladding strip with traditional elements such as wood and stone. 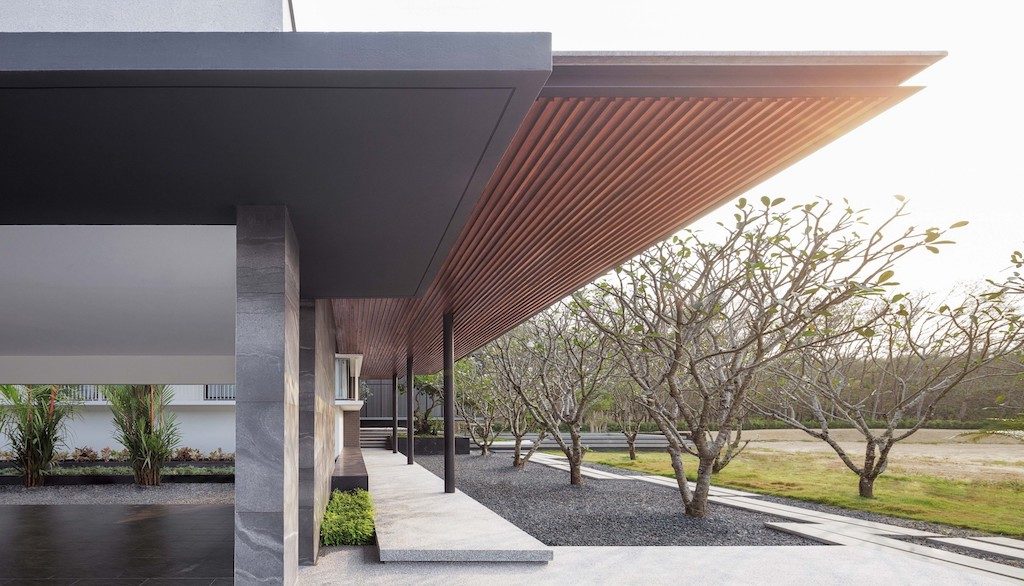 The house has been designed as an entity that possesses seasonal moods. In this project, the use of the 10-meter-long eave is to protect the sheltered areas from the splash of heavy monsoon rains, as well as to provide ventilation of air and humidity driven by the winds from the ocean. This extra-long extended eave is also a poignant example of the reinterpretation of a Thai tradition element, the steep gable roof. Here, the roofs are designed without the rain gutters, so as to accommodate the disposal of heavy seasonal downpours as quickly as possible. 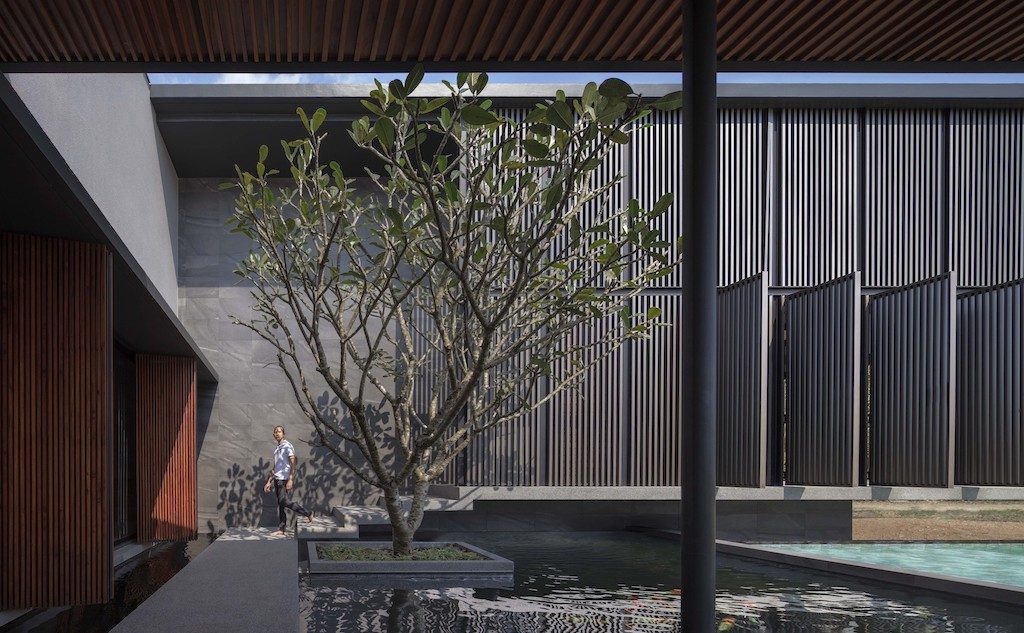 In the hot dry season, the same eave together with the trees carefully planted shields the house’s main structure from the strong sun coming from the south. From the main entrance, the Monsoon House does not exactly present a friendly face to the monsoon season. Aluminium strips cladding from side to side and bottom to top is all that one sees, an opening for fresh air but hiding from the outside perspectives. An exact calculation of aluminum-cladding apertures reflects a refined context. This is because they tend to equate engagement with openness, the measure of which is visual continuity or literal transparency.

These aluminium cladding facades deployed throughout the master bedroom played a salient role in the passive cooling of the interior. During wintertime, they act as insulation, filtering the excessive coldness and moisture derived from mountains and the sea. While in summer, they keep the building naturally cool and reducing the need for air conditioning, together with affording safety and privacy to the room inside. The path of the sun and the sequence of vertical and horizontal plains of this house also coincide with the rhythm of day and night. 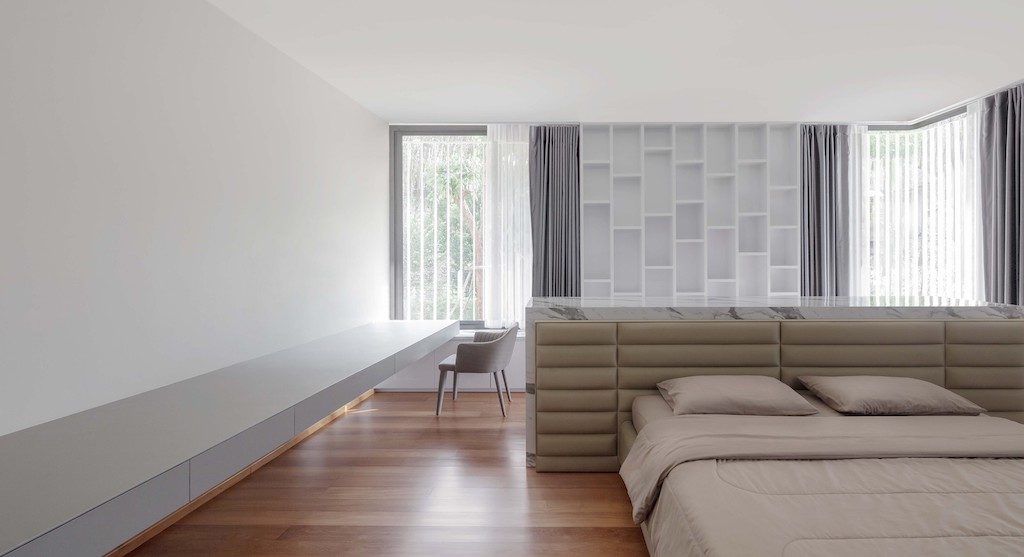 The master bedroom’s adjustable aluminium-cladding panels transform the connection between the exterior and interior spaces. When the master bedroom wants to reconcile with the outer world, the connection is displayed through its openings and changing enclosures, shifts in mood and patterns of behavior. The aluminium-cladding apertures regulate the light and secure the silence of the night. Its lighting-designed mechanism is a challenge, to make the master bedroom appeared floating above the pool’s existence. 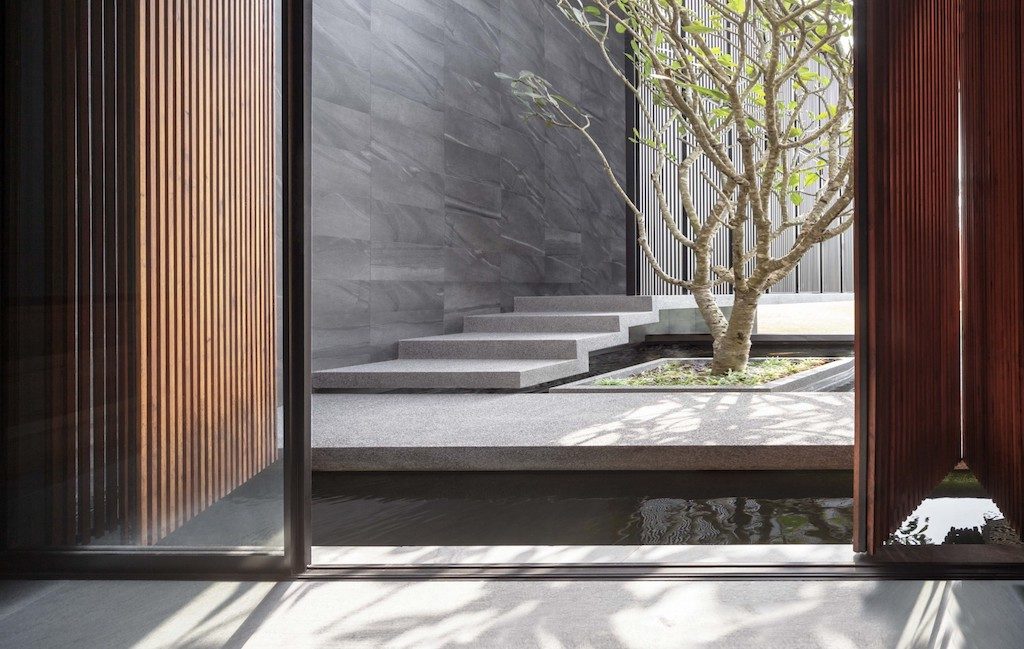 The master bedroom facades are a reference to the outside world. The layout of the house was initially planned to serve all generations of dwellers — from children to elders — with a universal design, which is usable to the greatest extent possible, regardless of their ages. Thus, the heart of the house is a swimming pool. At this point, its function connects generations together and creates a gathering space, reflecting the lifestyle of the extended Thai family. Its horizontal sun terrace reflects the activity of the day. 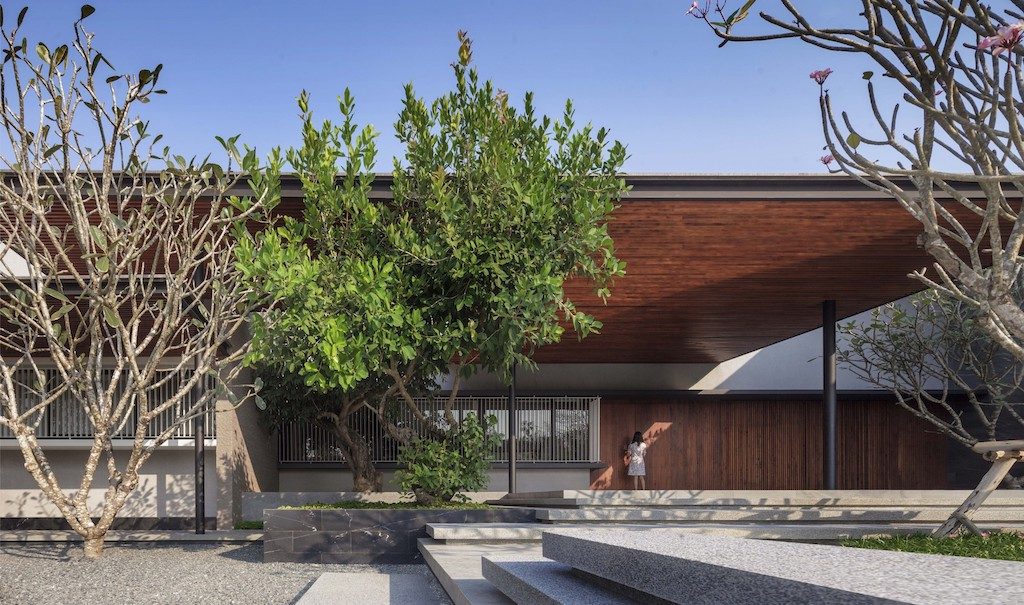 At sunset, a shadow casts from the terrace steps remind us of the fading day, while the surrounding trees await the sunlight of the morning. Thus, the swimming pool terrace is the place the day begins and ends. The goal-route promenade through this house is straightforward, where each entry of the Monsoon House feeds directly into each family unit. For example, access to the master bedroom can be achieved by the private pathway close to the sun terrace between the main foyer and the swimming pool. However, the layout of the overall building components is still confirming that all volumes are relative. It can be broken as two family units or embraced as an entity.

With a plan to further build an expansion for the future extended families around the swimming pool, the central space is still being shared and returns to the singular. As the interior confirms the existence of movement and touch of the family members, the exterior reveals its response to the gentle landscape. 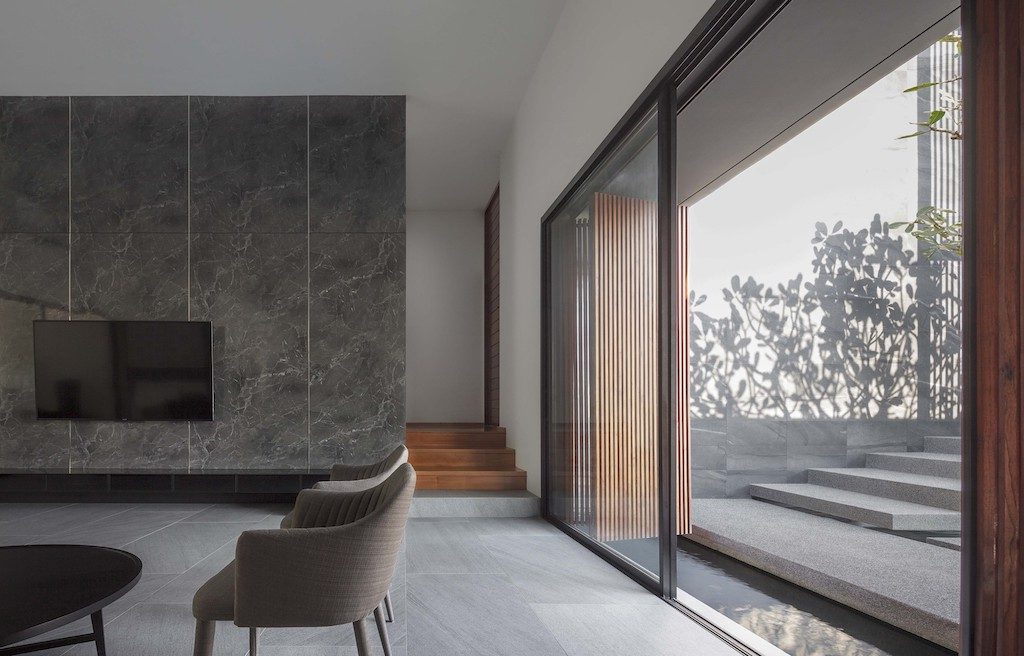 The movement of the ramp and steps open up to the landscape, and the landscape provides varying experiences to the house members. The intention of the designers is not to build a garden, but to planta new eco-living system. The areas of green contrast with the sky. The self-sustainable park with its landscape of tropical fruits, rubber trees, fish pond, and cage-free animal terrain forms a focal feature of the house. The former existing trees are honored, as the landscape masterplan gives room for their participation. The trees turn toward the sun and wind and protect the building according to the seasons.

The water pond is built in order to pay homage to the monsoon rains. Its water is used to provide sustenance for plants both inside and out, linking the house with the cycle of the park. This honouring of natural context, framed in a place of genius loci, is the beginning of a search for a higher order of sustainable modern architecture. 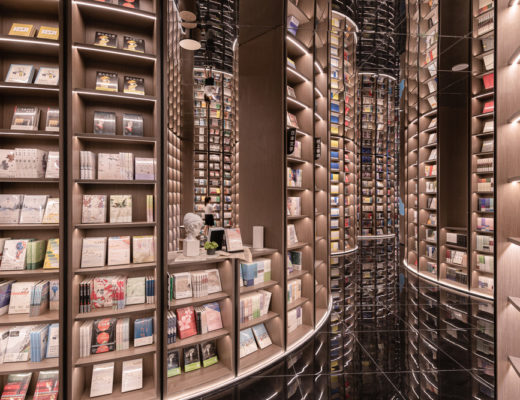 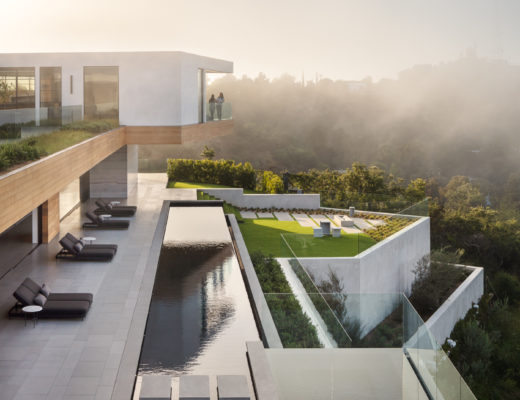 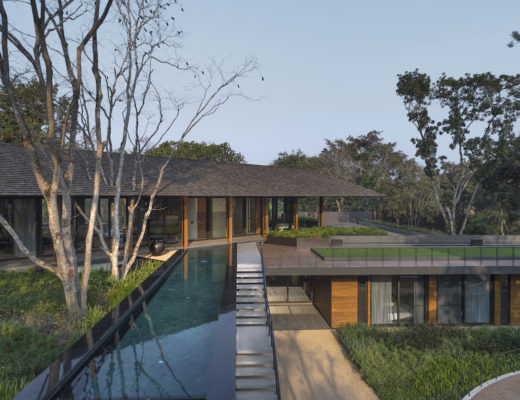