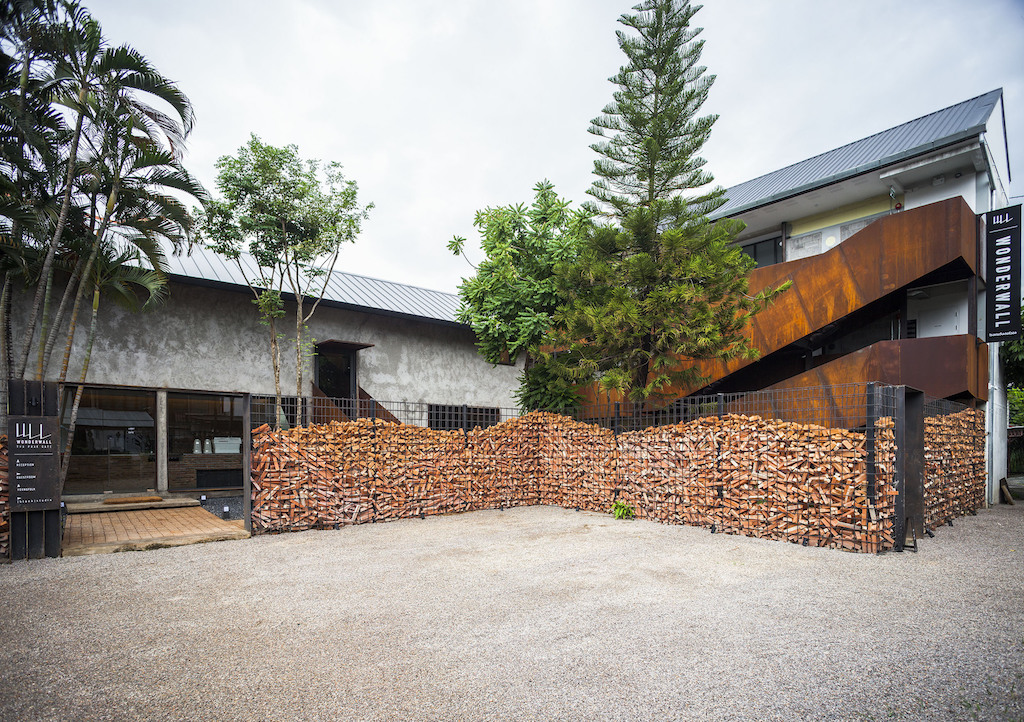 Chiang Mai, northern Thailand’s mountainous town is home to a raft of hotels, spas and art galleries, and has gained the reputation of being the country’s cultural hub. Wonderwall Hotel by Blankstudio is a 571m² boutique property located close to Tha-Pae gate, another important landmark inside the old Chiang Mai town. The site hosting the hotel belongs to the hotel’s partner, which consists of several houses and a part of it once housed a dormitory. When the property owner decided to convert the old dormitory to Wonderwall Hotel. 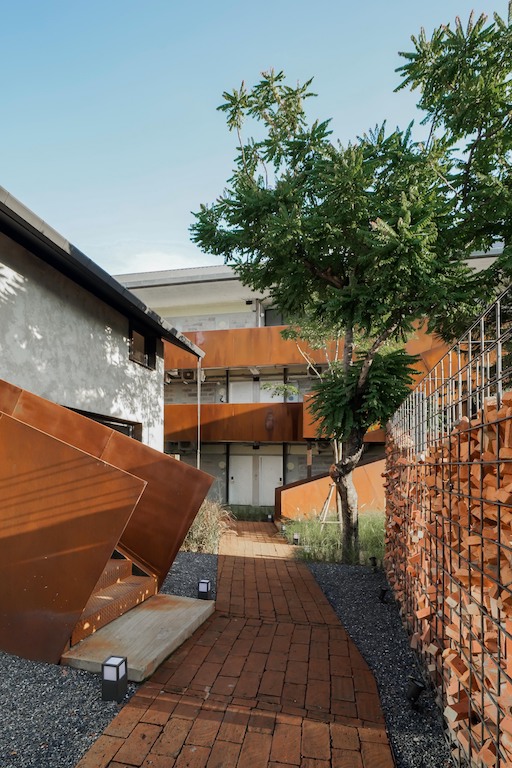 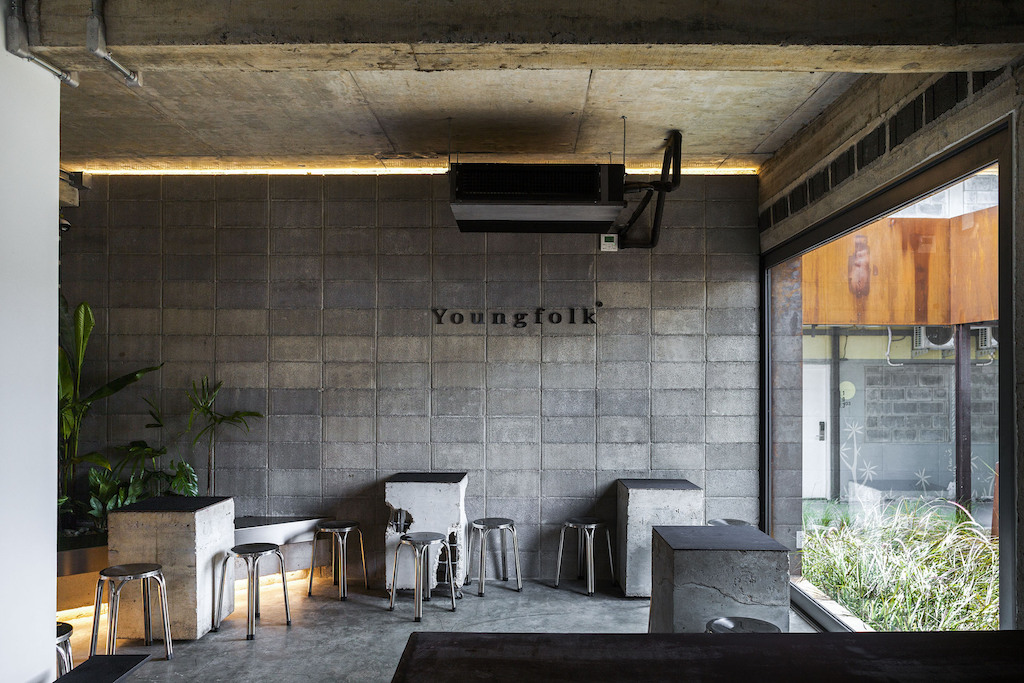 The hotel was built upon the old three-storey dormitory and now consists of 14 rooms. The other new building was also built to be the lobby of the hotel, while Youngfolk Café, the well-known café from Jom Thong area also decided to open their second branch here. 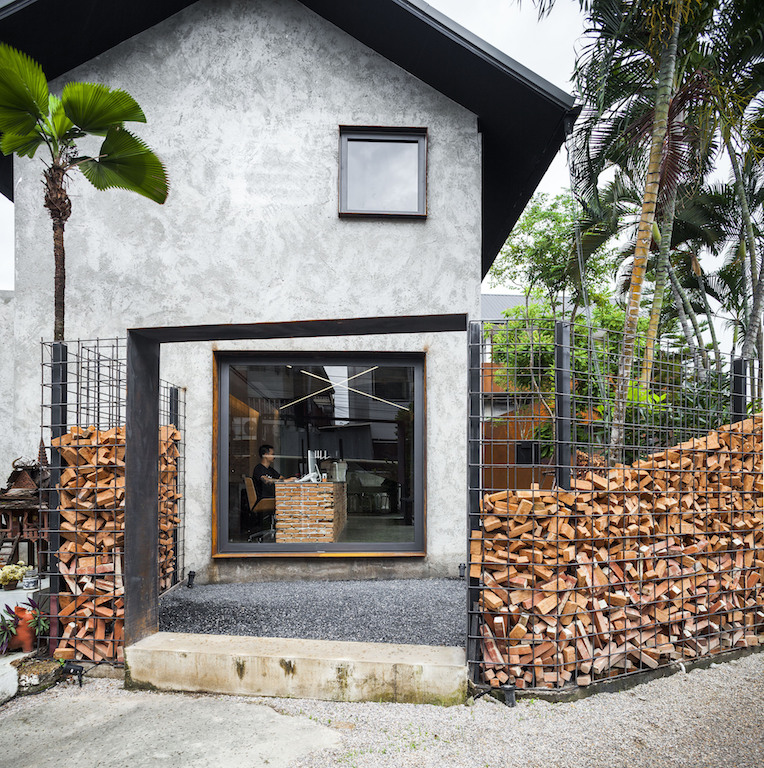 Meanwhile, the space is designed to be a sharing space that allows the hotel to operate simultaneously with the café so that it can also accommodate visitors too. The second floor of the building also houses the office of Blankstudio, the partners and designers of this hotel. The concept of the property is defined by the imperfection of materials, with the help of old city’s gates and walls close to the project which the designers chose to adapt in their design. 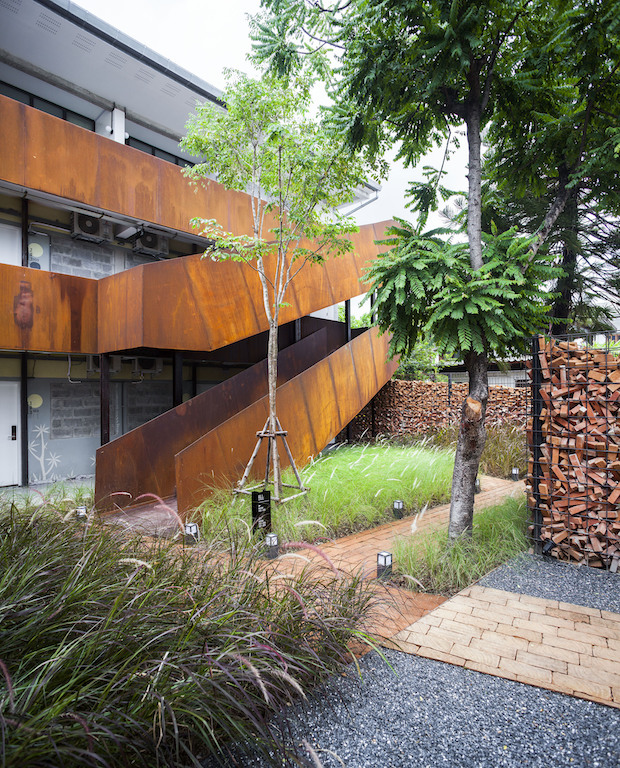 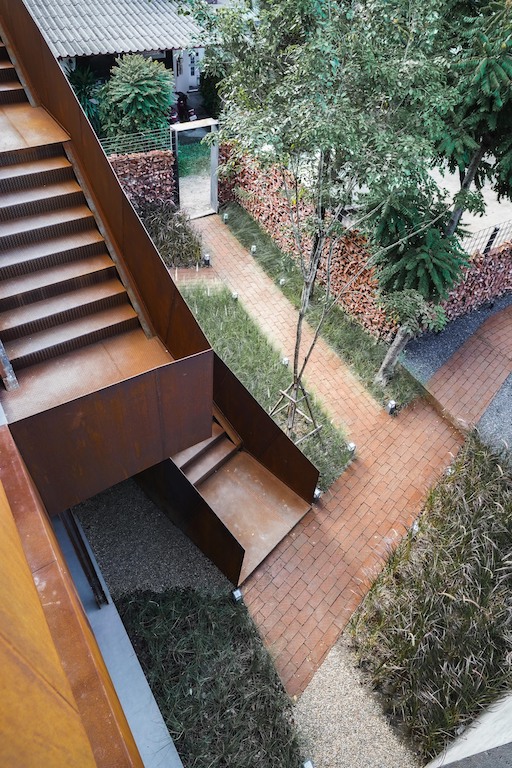 The architects have applied the inspiration firstly within the walls of the hotel to add new elements. The wall’s outline looks more combust by the combination of metal cells and irregularly arranged bricks. By putting bricks halfway of the wall, not only does it create privacy, but also expresses “imperfection” of the materials – a recurring theme throughout the property. 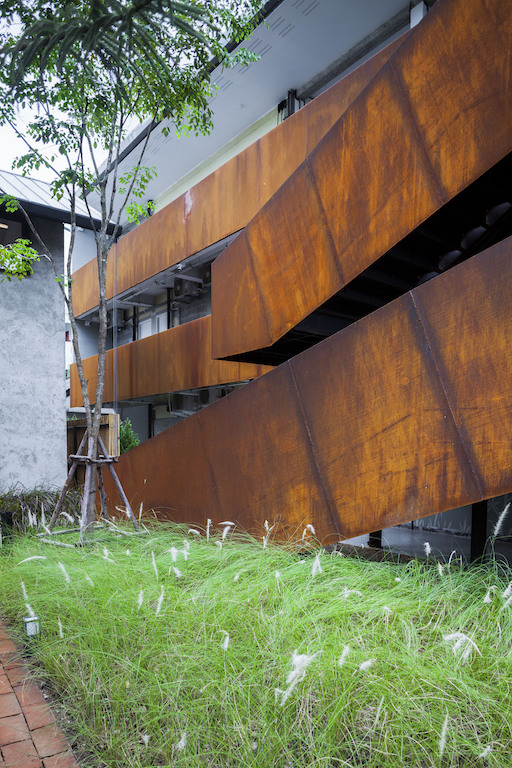 The rusty metal texture, rough cement-coated wall, naked concretes inside the building, as well as the furniture inside the café, are all meticulously chosen to express genuineness of materials. The architects believe that the texture of every material expresses its own beauty when arranged properly in a simple way. The rooms carved out from the former dormitory are smaller in size. 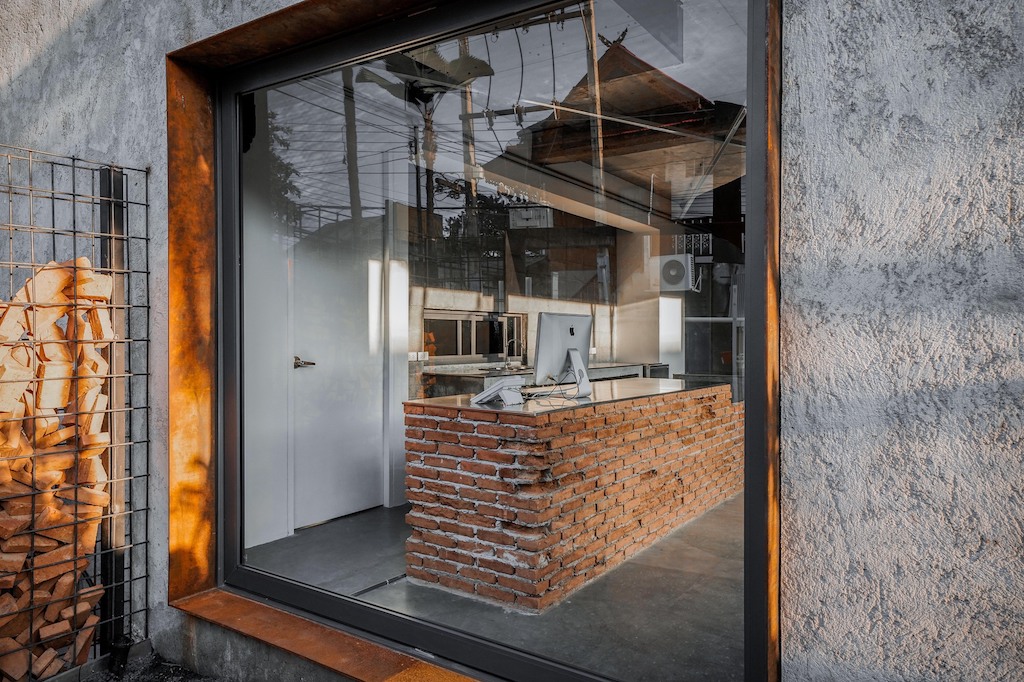 That’s why the bathroom walls of the superior rooms were replaced with reeded glass to give it a lightness. White coated walls were chosen to make the rooms bright and light, while the suites were once two dorm rooms which are now connected to each other and can accommodate up to three people; the wall in front of the room is now replaced frosted glass and located close to the living space, making this type of minimalist room suitable for bigger groups. Landscape-wise too, the design reflects a natural and sparse approach. 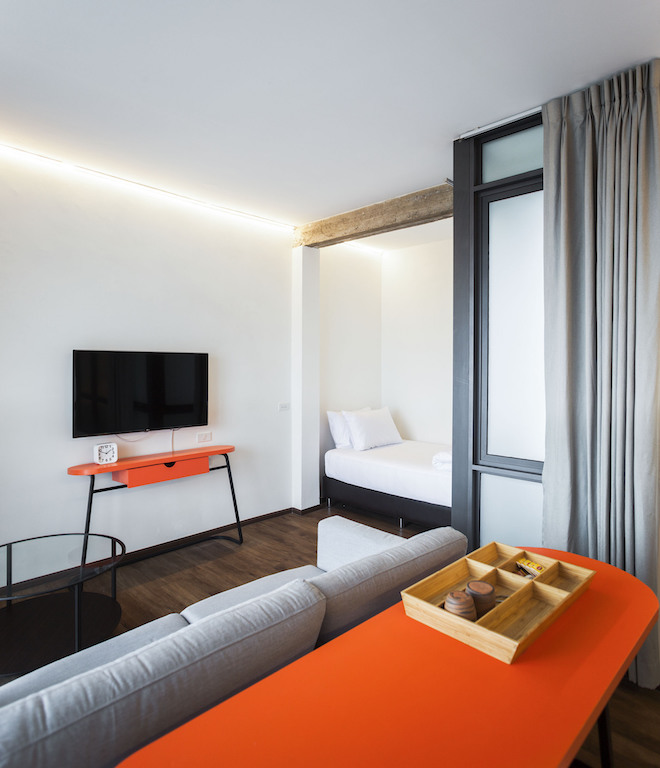 Tall trees and bushes are two main plants to be used to create shades for the garden and hotel so as not to make the space too dense. Betel trees and gooseberry trees were there prior to the construction and the architects decided to keep most of the old trees, adding only two new buoyancy trees to create shade for the lobby building in the afternoon.

The walkways are laid with the very same bricks used for building the hotel’s wall. This walkway has an intuitive design and helps in wayfinding to different spots of the project. 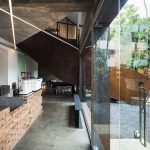 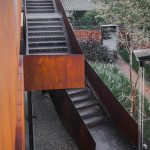 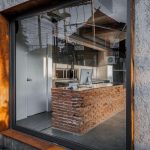 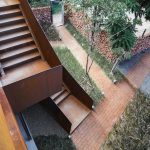 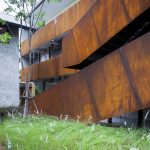 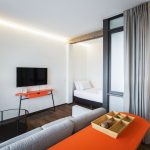 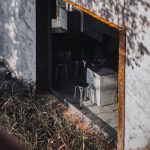 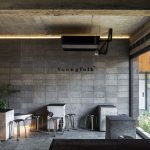 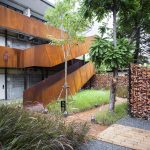 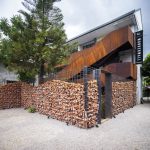 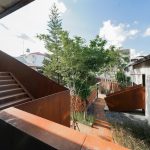 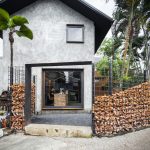 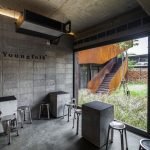 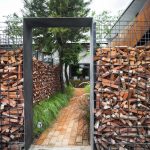 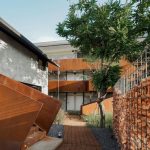 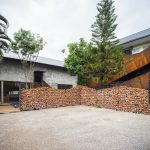 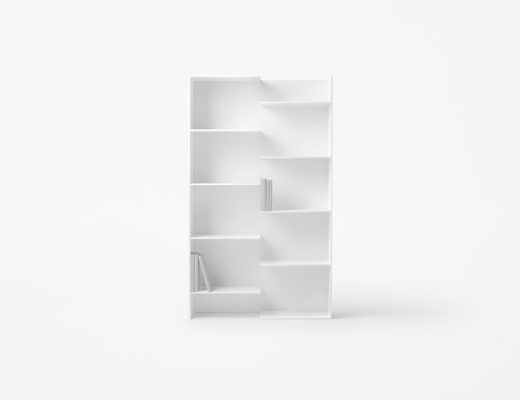 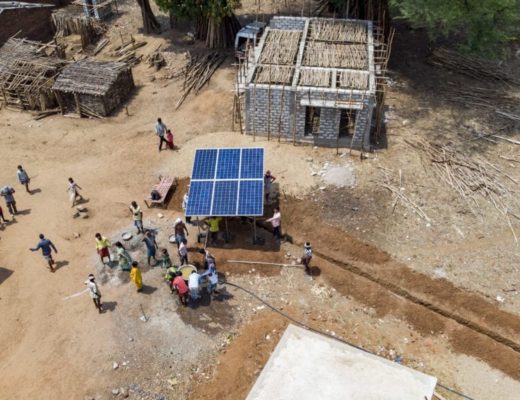 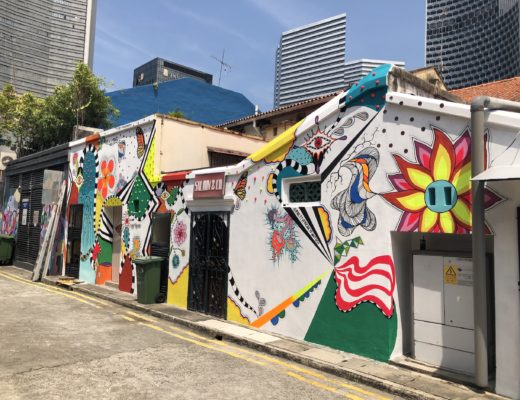