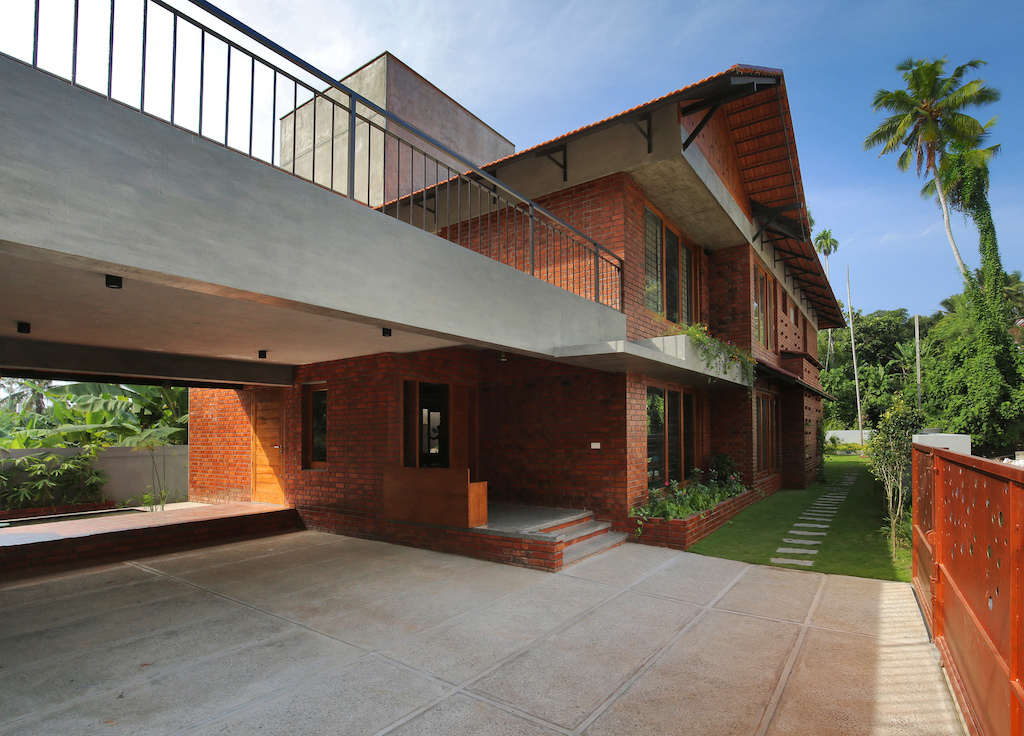 Srijit Srinivas Architects, based in the Southern Indian state of Kerala, has designed a 4,250m² house for a couple in the healthcare industry. The family residence inhabited by the couple and their two children, is located on a long and irregularly narrow site in Trivandrum with its longer side facing west. 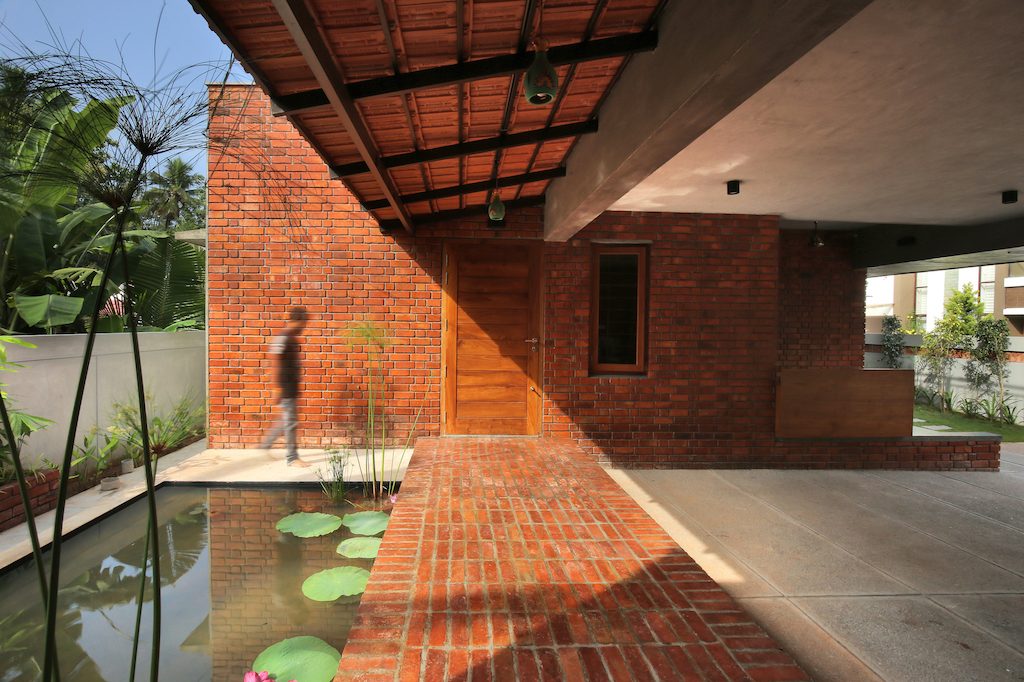 Termed as the Brickhaus due to the predominant use of bricks as raw materials, it is designed to be both a place of respite as well as an active place for the clients – a young family with doctor parents and their two kids. The lady of the house is also a trained dancer, so the family required a space that would allow for the expression of a diverse range of functions. 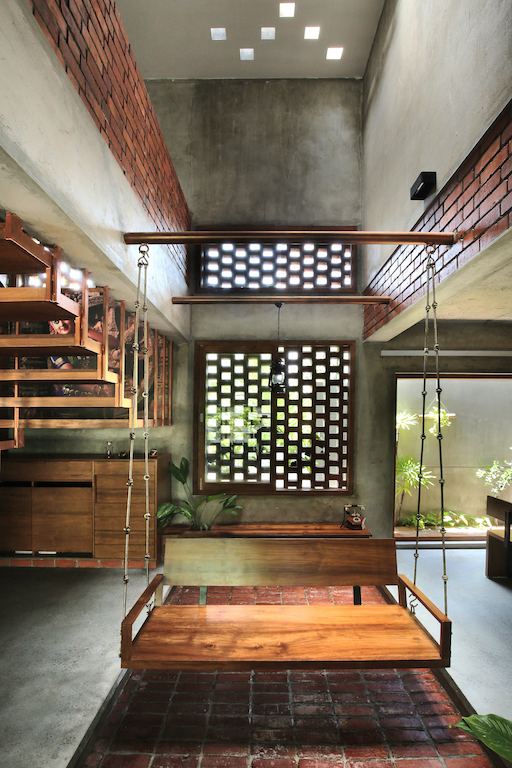 Using one of the oldest and versatile materials – the country burnt brick. The Brickhaus naturally evokes a feeling of nostalgia. The house has an ethnic charm, which is accentuated in the interplay of light and shadows by placement and detailing of fenestrations and the material palette. 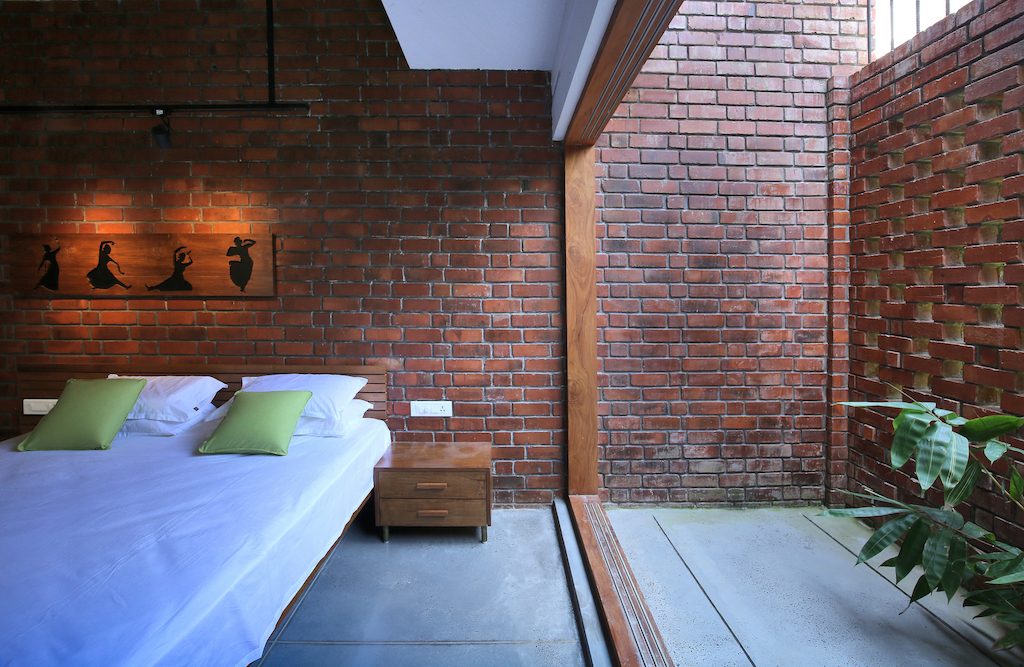 The design has also attempted to bring nature inside, with both the use of contextually detailed skylights and latticed screen – defining breezeways, facilitating natural cooling of the interiors and complemented with a distribution of internal gardens and pools, working together to bring in ample natural light. 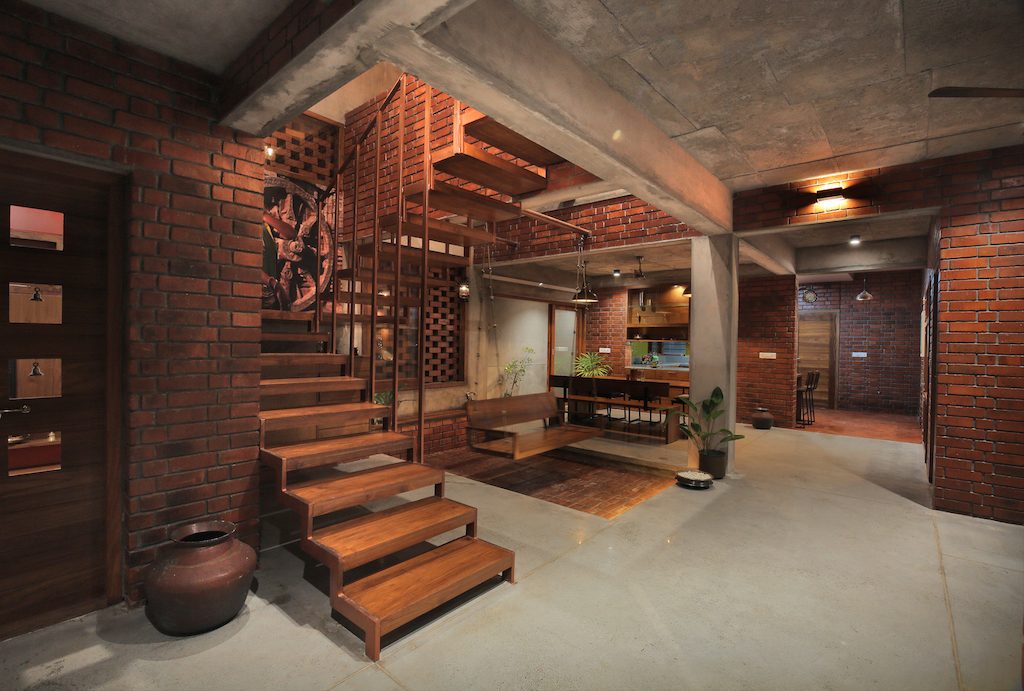 The house is a narrative of open and interconnected spaces that challenge the standard assumptions of load-bearing brick construction, an out-of-the-box variation of different scales, of polished concrete floors and exposed concrete ceilings, and of un-rendered brick. 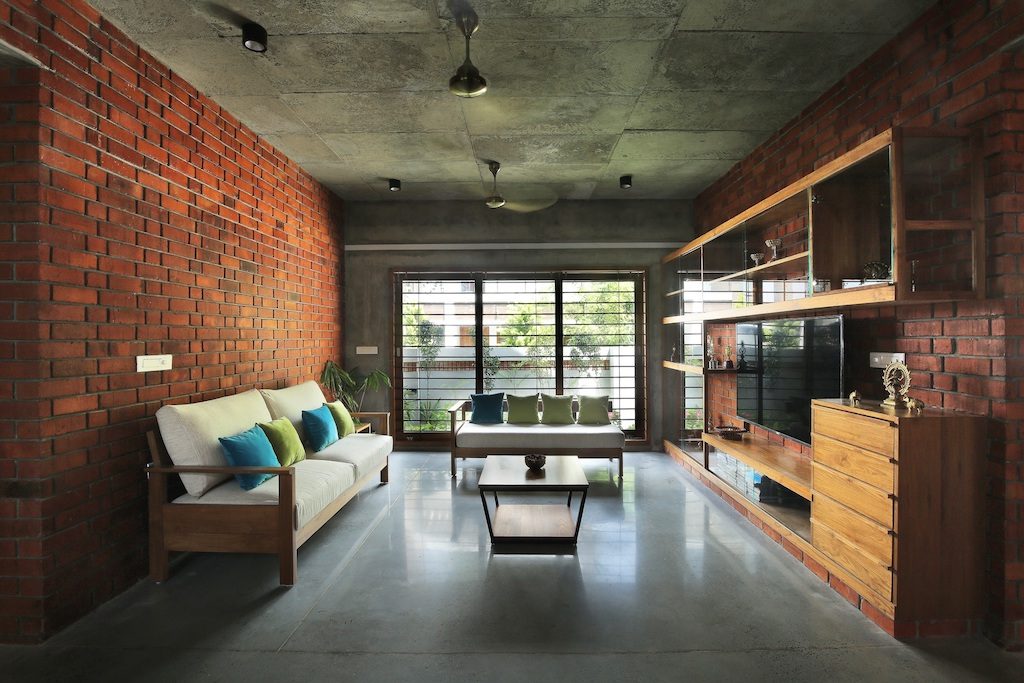 It celebrates the imperfection of the material substrate, and the organic expression of asymmetry conspicuously present throughout the space adding to the sensory dynamism. The custom-built furniture and joinery items add to the charm of the house. From a functional layout, the dining area with its east-west orientation opens out to a landscaped internal courtyard, connecting the house with the ‘outdoors’. 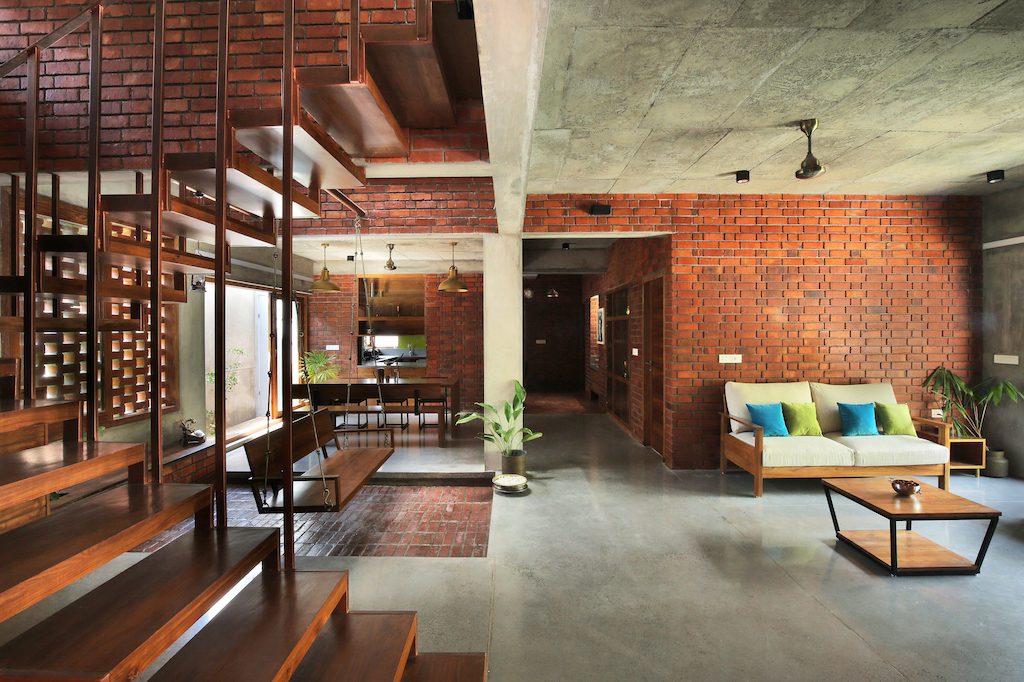 This functional syntax is carried across to other parts of the house also, such as the master bedroom having a landscaped court bound by brick louvers bringing in cool breeze while also controlling the privacy from the outside. On this same theme, the medical consultancy space and its adjoined guest bedroom form a separate block created through spatial distinction from the rest of the house, yet subtly blended in with the house. 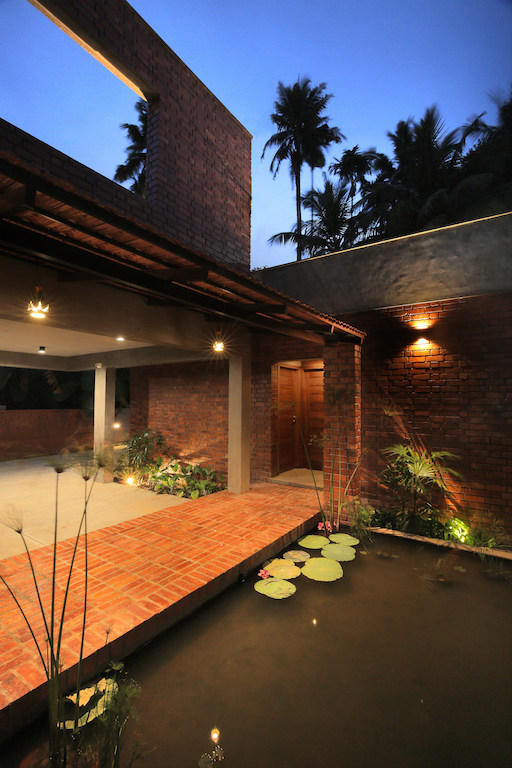 A carefully detailed brick-paved path forms the tectonic cord connecting the two spatial blocks together while also doubling up as a performance stage floor for small family gatherings. The quiet reflective brick-edged lotus pool beside the informal stage gives an organic vibe to the space. 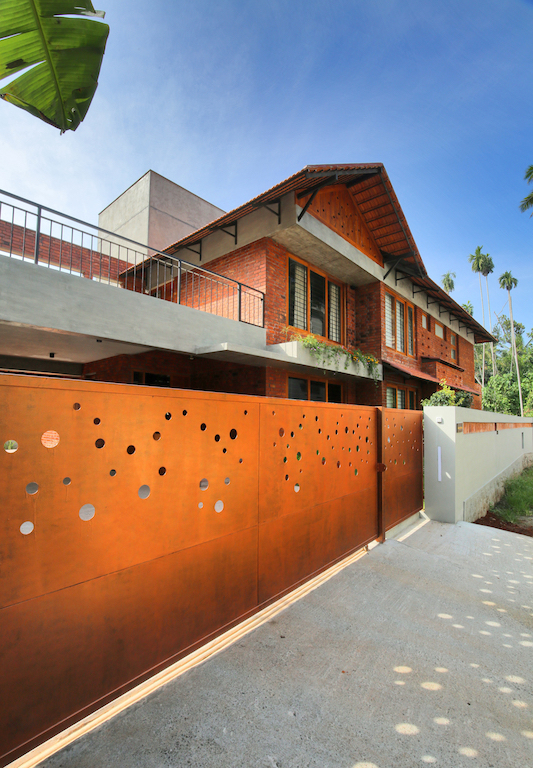 The BRICKHAUS is a ‘net-zero’ entity, which responds to the potential of its site in an aesthetic manner, and the aspirational requirements of its clients to deliver a restrained architectural space, which is both visually capturing as well as functionally efficient, and an organic addition to the local milieu. 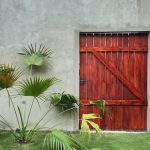 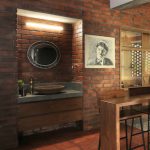 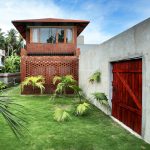 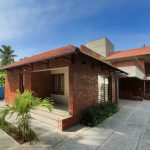 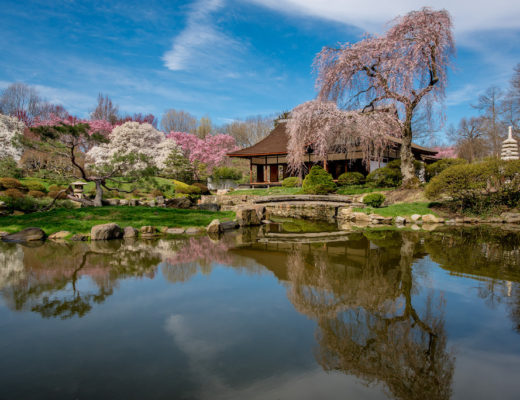 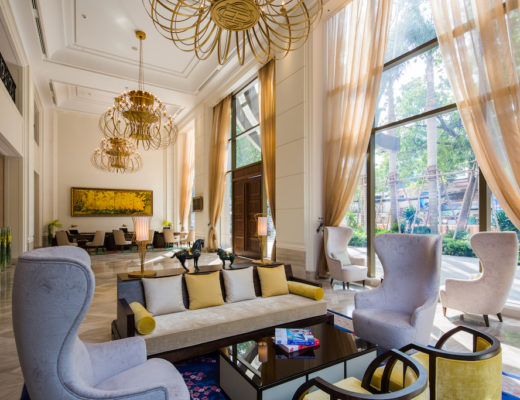 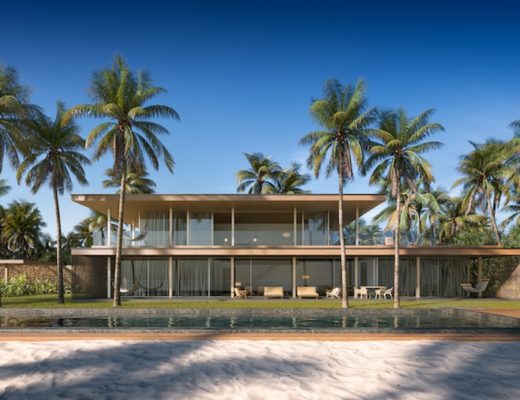