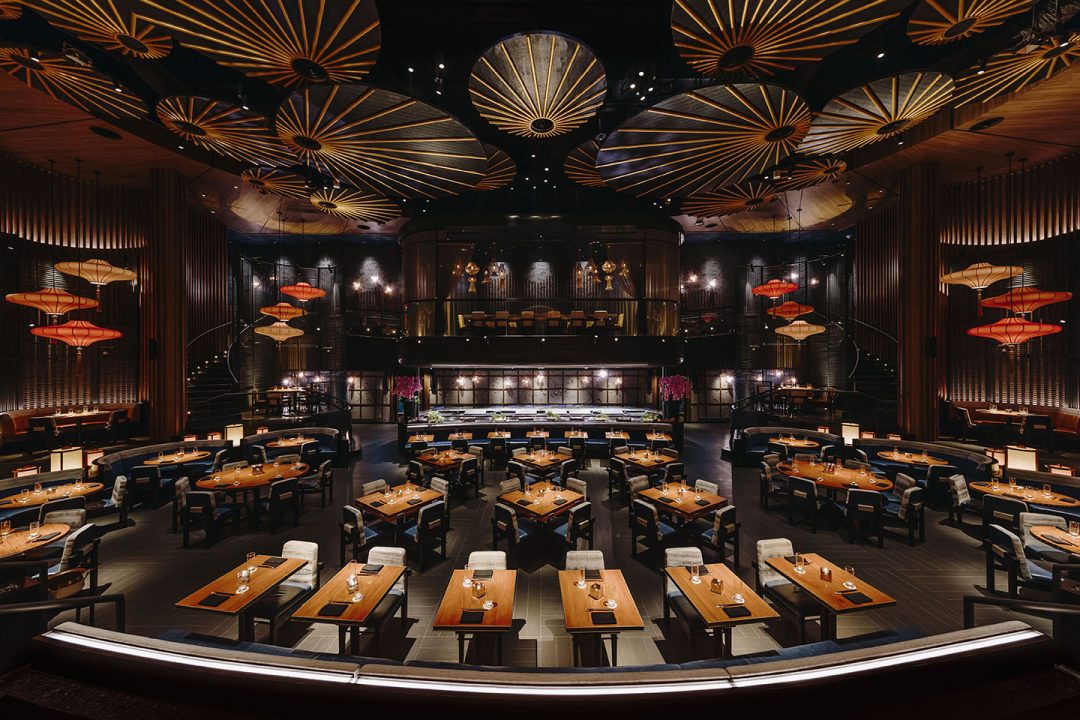 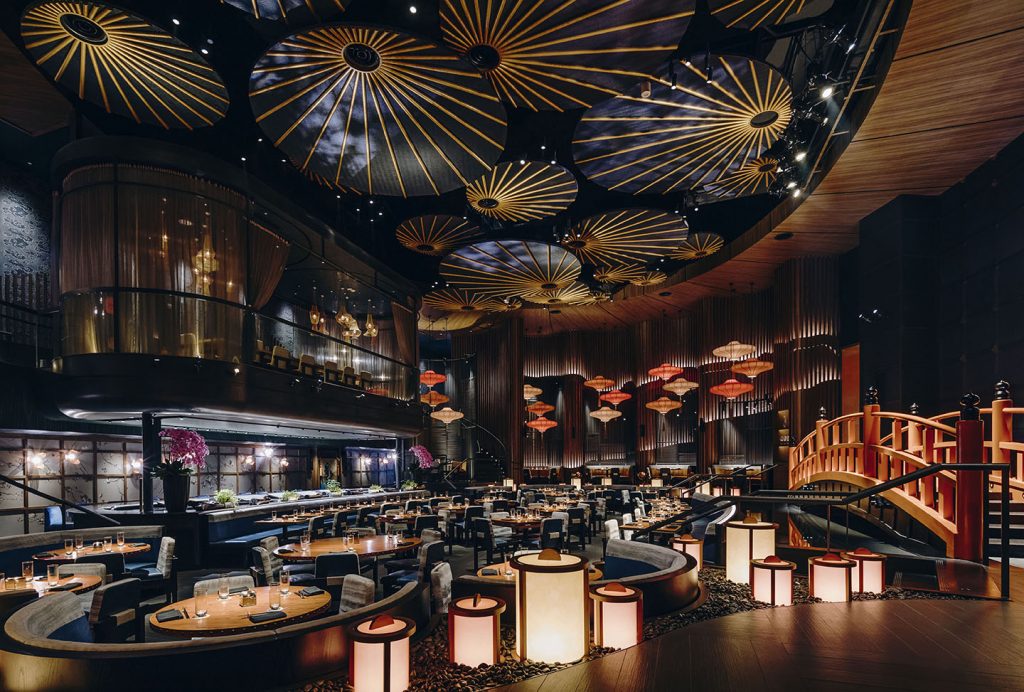 “Our design inspiration for KOMA includes several touchstones from Japanese folklore and mythology,” says the design team. The name, which means spinning top in Japanese as well as being a female name, pays an ode to a playful character by the name of KOMA who is the focal character in the narrative. 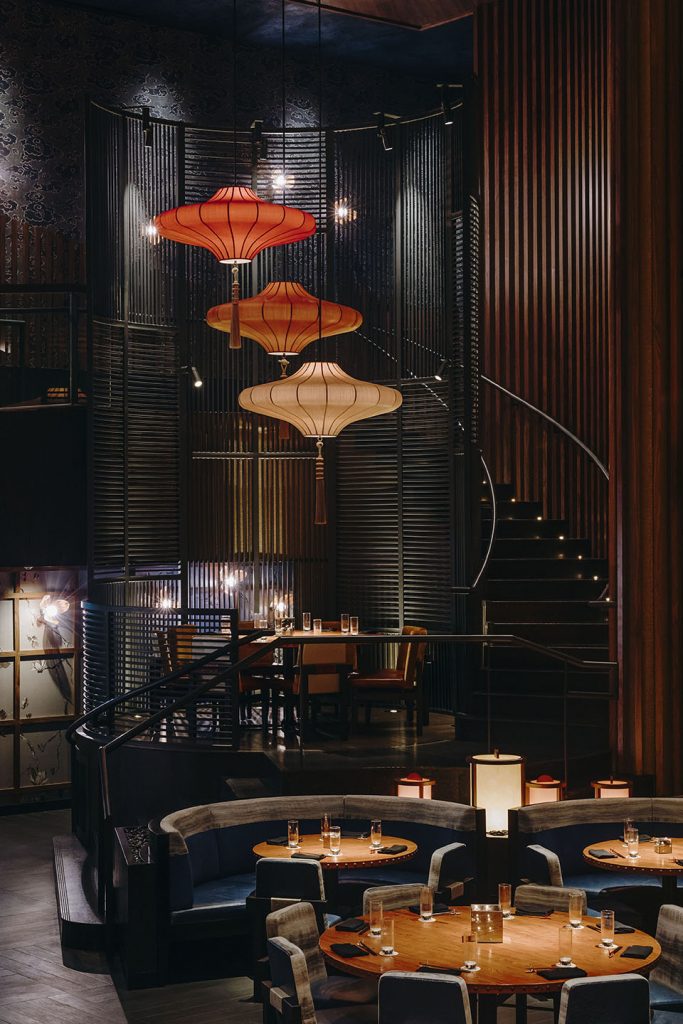 The palette is a range of oranges and blues and is moody and darker in feel and finishes, with warm lighting and pops of bright orange and copper. “For the FF&E, we incorporated details that embody Japanese design, such as joinery and floral motifs, but interpreted them in a modern way,” says the team.

Guests enter KOMA from the Marina Bay Sands mall through a vestibule that is shared with the new Marquee Nightclub. While Rockwell Group did not design Marquee, the entry vestibule establishes a connection between the two venues. A protruding canopy improves the venues’ visibility from the mall and is clad with technology-embedded screens. The ceiling canopy of the vestibule contains decorative bowl lighting fixtures. 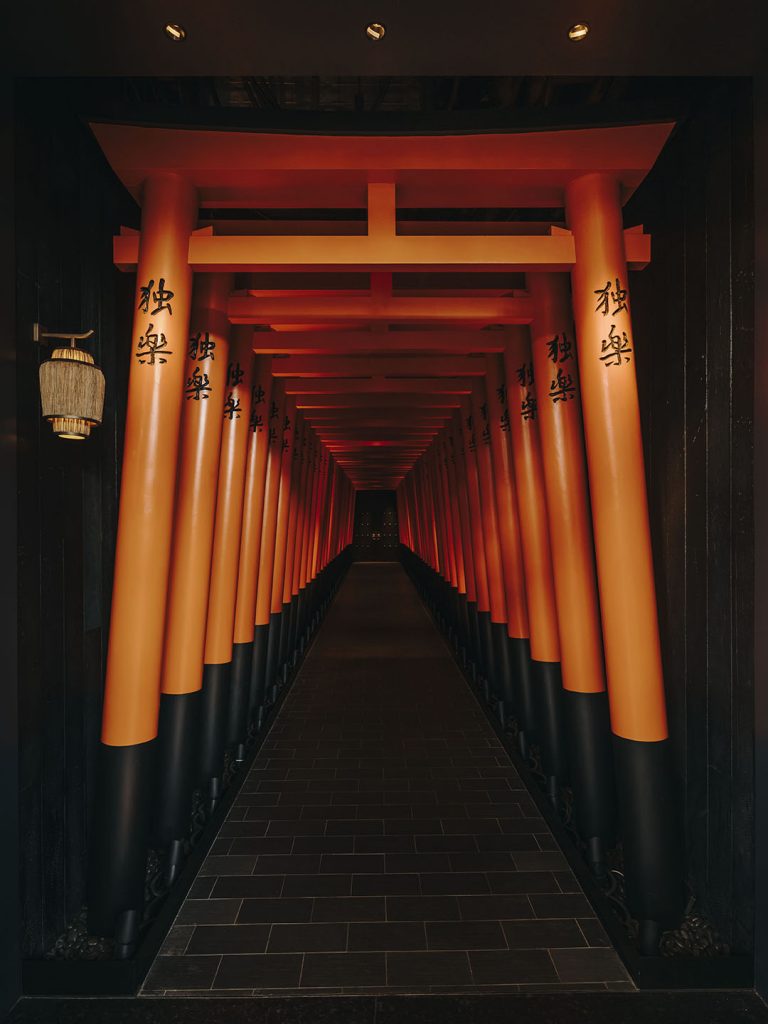 KOMA’s entry splits off to the right, leading guests down a long tunnel directly inspired by Fushimi Inari-Taisha, an important Shinto shrine in southern Kyoto, famous for its vermillion torii gates. Fushimi Inari is the most important of several thousands of shrines dedicated to Inari, the Shinto god of rice. 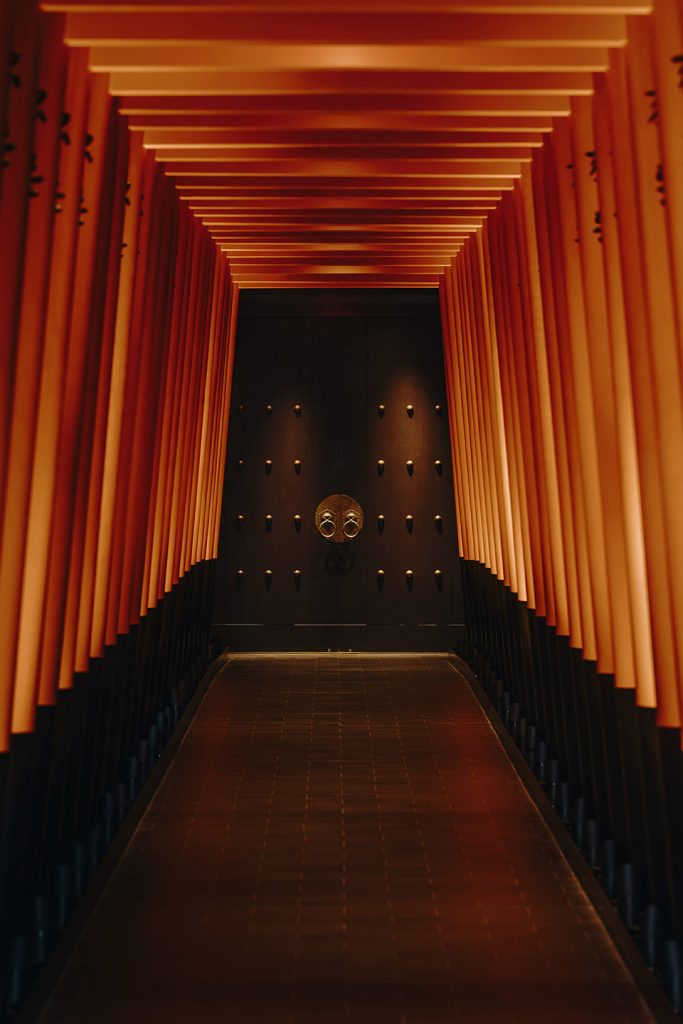 The tunnel, since its opening, has become a major draw as an Instagram hotspot for people thronging the mall. Densely placed glossy orange arches with black bases line charcoal wood walls. Rectangular tiles on the floor mimic the shrine floor. Traditional roof shingles line the bases of the arches and sparse sconces light the way along the 65-foot-long tunnel, which ramps up slightly as it approaches the lounge. 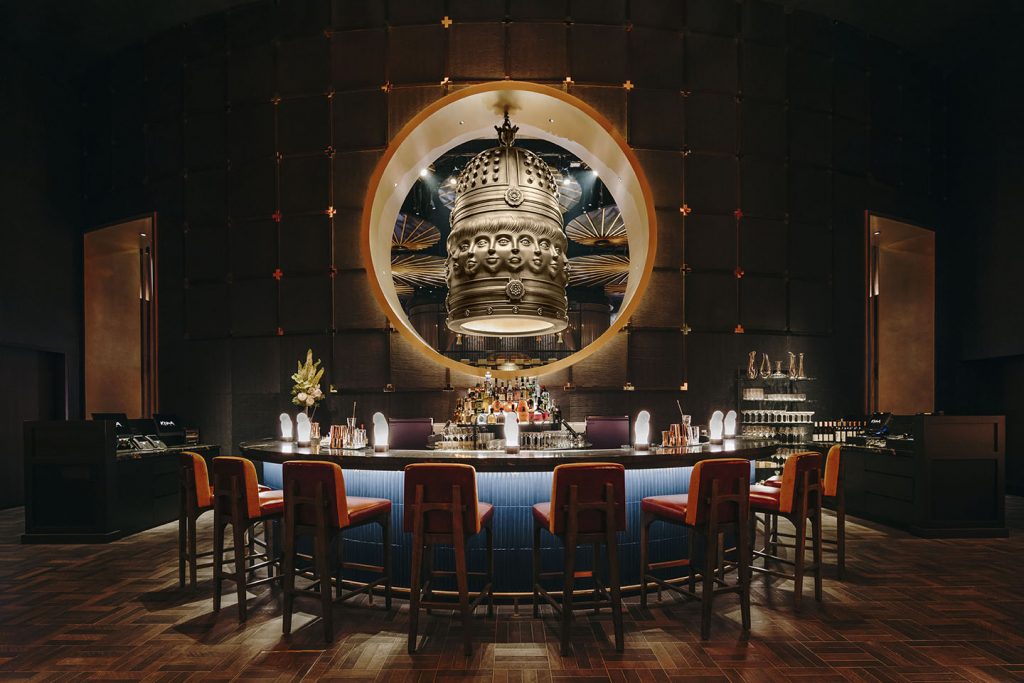 The tunnel terminates in the lounge, which is separated from the main dining room by a curved wall that was part of the existing theater structure. In the middle of the wall is a monumental bell that can be seen from both spaces. It features molded faces sculpted around its circumference, referencing KOMA’s different personalities. 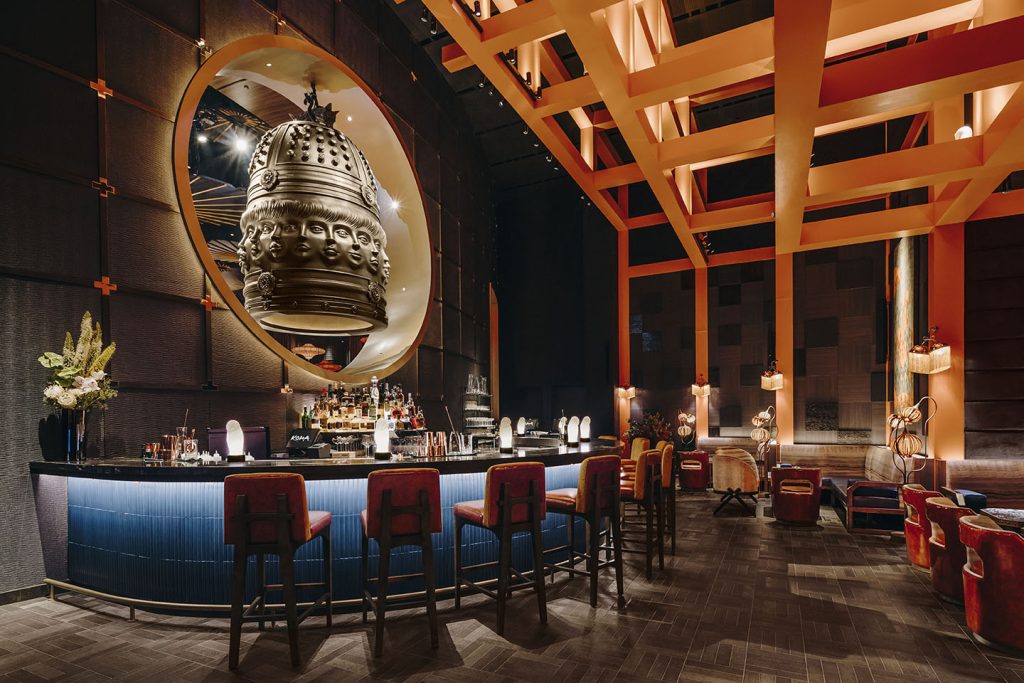 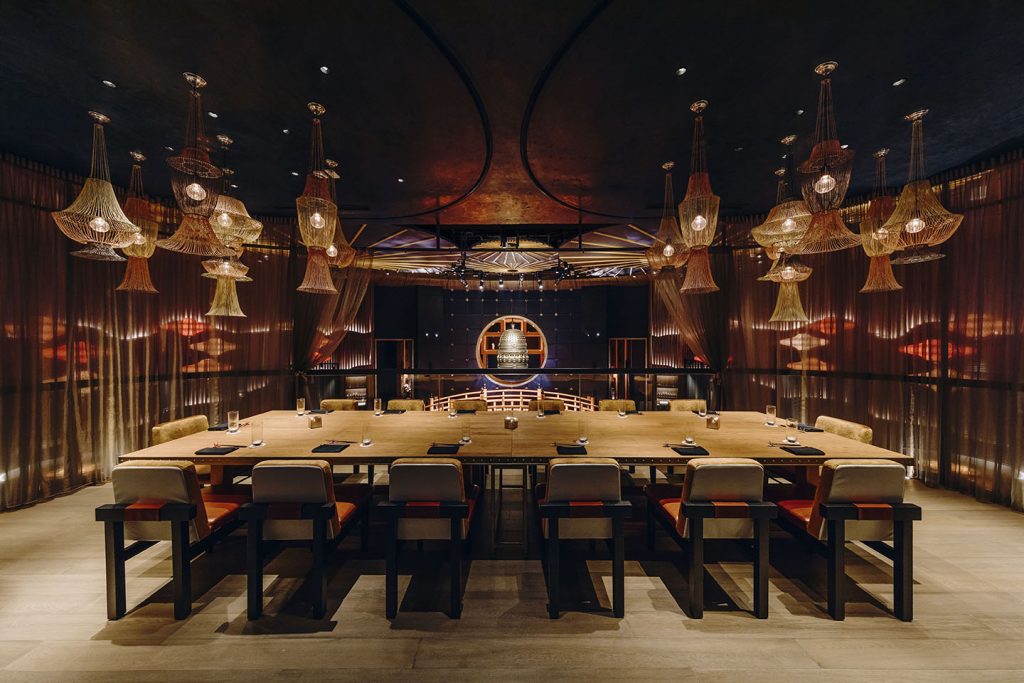 In the main dining room, the bell is suspended above a traditional bright orange Japanese bridge, which spans a shallow pond. Inspired by a Japanese courtyard, the floral motifs and blue and orange hues give it a distinctive feel. 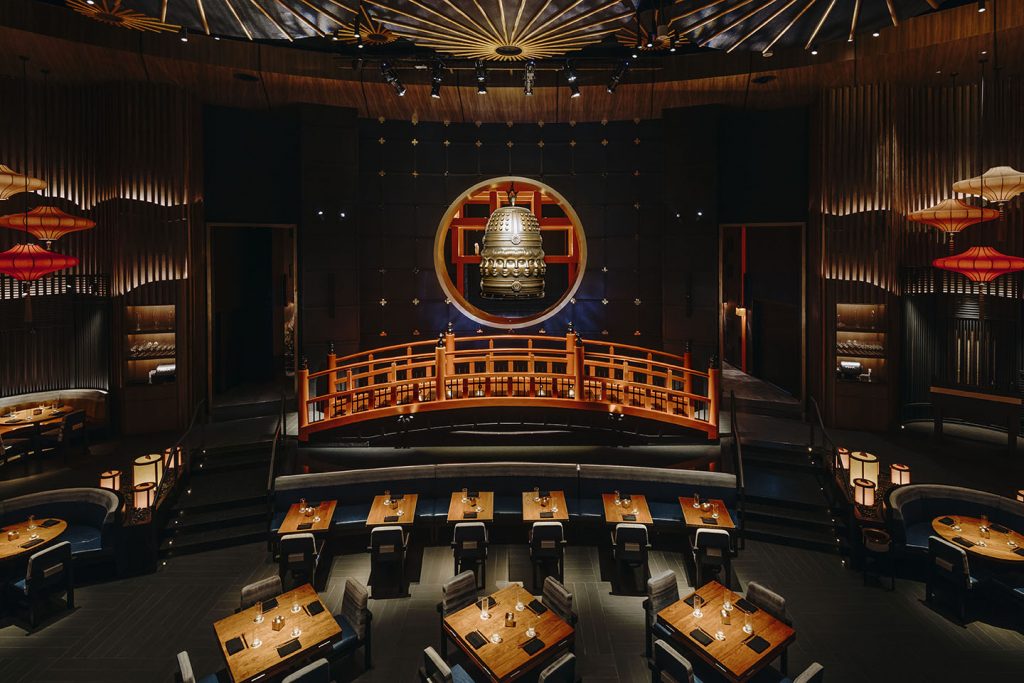 Undulating, slatted walls surround the dining room and feature an LED lighting effect that depicts mountain topography. The curving walls create niches – one houses the DJ booth – that hug banquettes and Hollywood rounds . The high ceiling features decorative acoustic panels in the shape of abstracted lily pads, mimicking the surface of a pond.  Guests can also access a mezzanine level that sits above the sushi bar and contains a hanging “object” which has a glowing, moon-like effect and emits a warm, amber glow even when it’s not occupied. 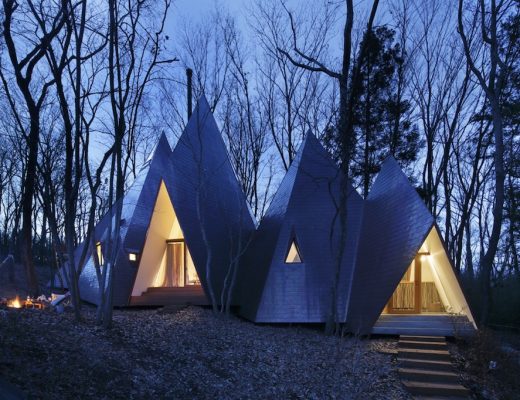 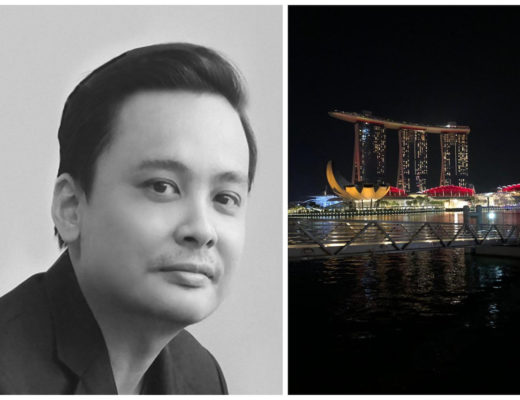