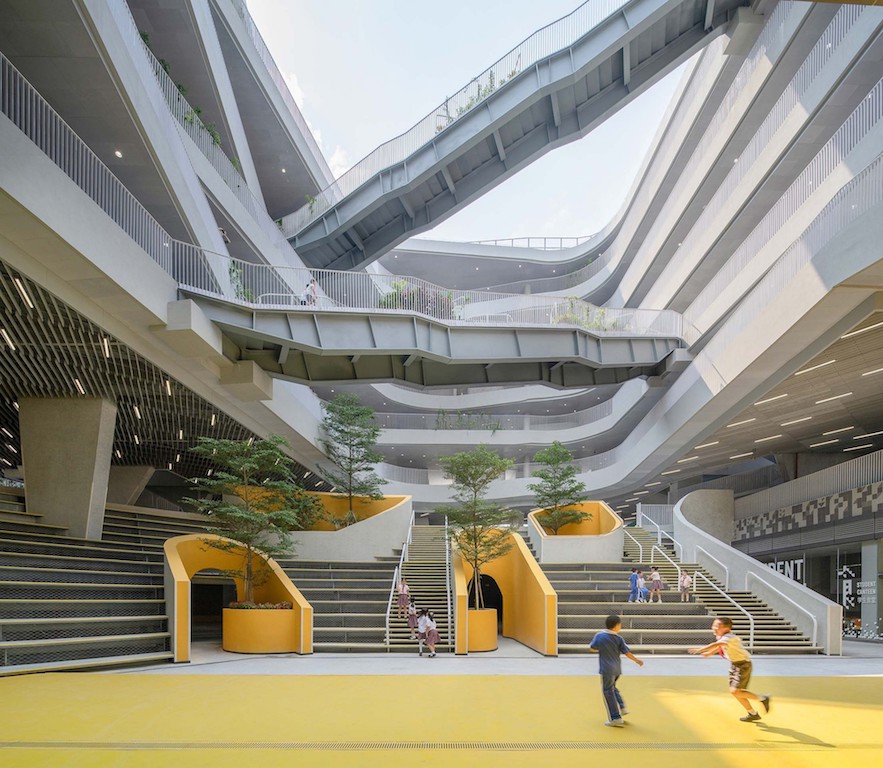 Over the past 40 years, Shenzhen has become one of most strategic urban cities in China. Located along the eastern side of the Pearl River Estuary, it has undergone rapid development with skyscrapers mushrooming all over the city. The high-rise developments are not restricted to only living and working but even leisure and education institutions are now moving upwards.

The building site of Hongling Experimental Primary School (HEPS), led by architects Jianxiang He, Ying Jiang, and its surrounding area was originally a hill named Antuoshan in the north-west part of Futian district. This hill is widely known in the city because it has been the source of granite earthwork for urban reclamation. While the hill has almost but disappeared, leaving a small area standing to the west of the school site, the rest of the terrain has been levelled into urban development land after the quarrying activities ceased.

The site of HEPS, originally planned for a 24-class school, is about 100 by 100 meters. Its current capacity has increased to 36 classes due to the lack of an adequate number of schools, with a total floor area double that of the original planning. The building ratio is over three. Besides, giving way to the subway line at the southeast corner, the retreat from the road on all sides, and the building code of the sunlight spacing – a mandatory requirement – the architectural design had to confront many spatial challenges. 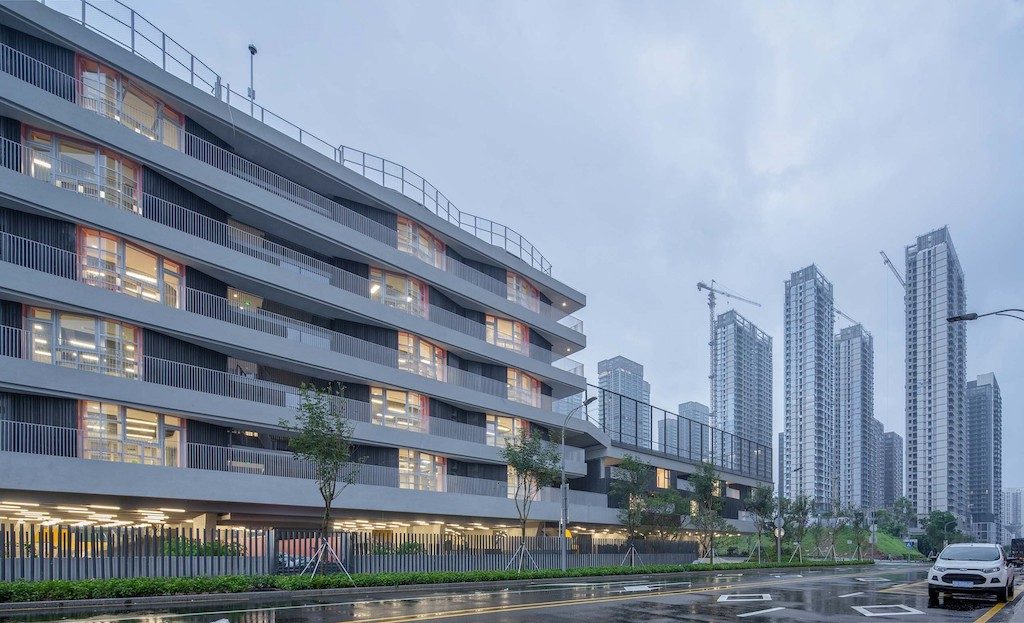 School buildings over 24 meters (the division number between low-rise and high-rise buildings) have been widely applied in Shenzhen’s primary schools, but the drawback is the obstruction to the students’ interaction caused by excessive vertical traffic and the compulsory closed fire staircases. In the scheme of the HEPS spanning 33,721m², the architects make effort to control the building height of within 24 meters, to encourage horizontal interactions and try to respond to the physical and psychological characteristics of children within the architectural and landscape spatial design. 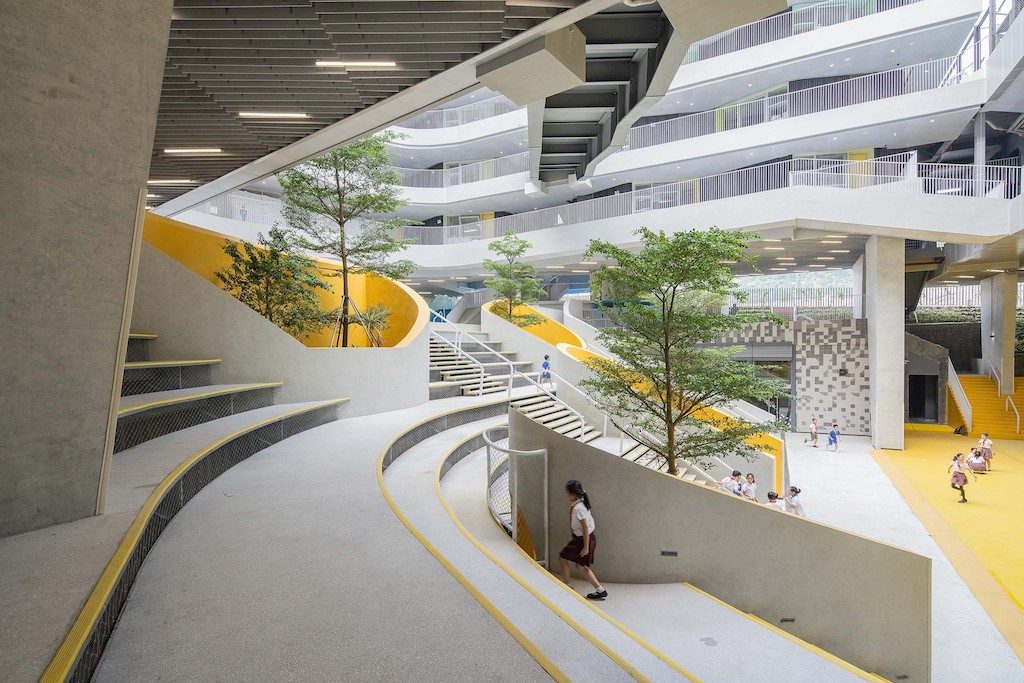 The school building, divided into two halves with different heights on the east and west, almost fully covers the land that can be constructed in the site. The general plan is an inter-linking mirrored E-shapes. The west half uses the obligatory spacing between classroom rows to create a “valley” courtyard with two curved boundaries. The courtyard sinks to the underground level, fusing with the green sloping garden obtained from the retreating distance site boundary. The underground cultural/sports facilities and canteen space are fully illuminated and naturally ventilated. 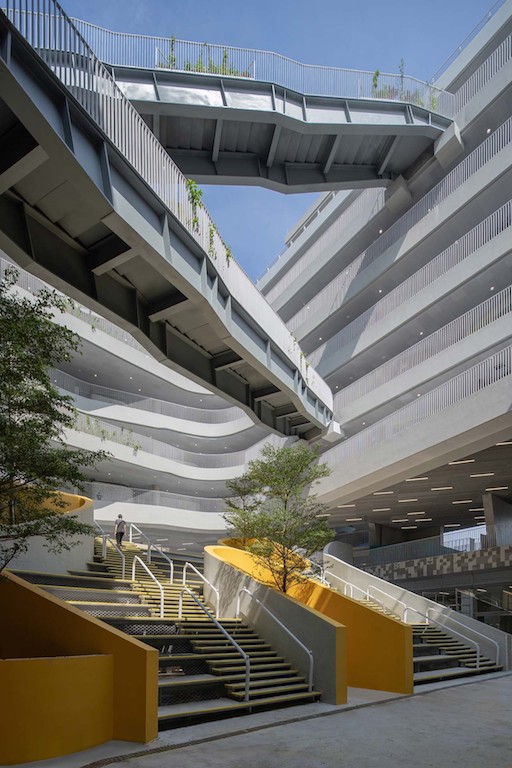 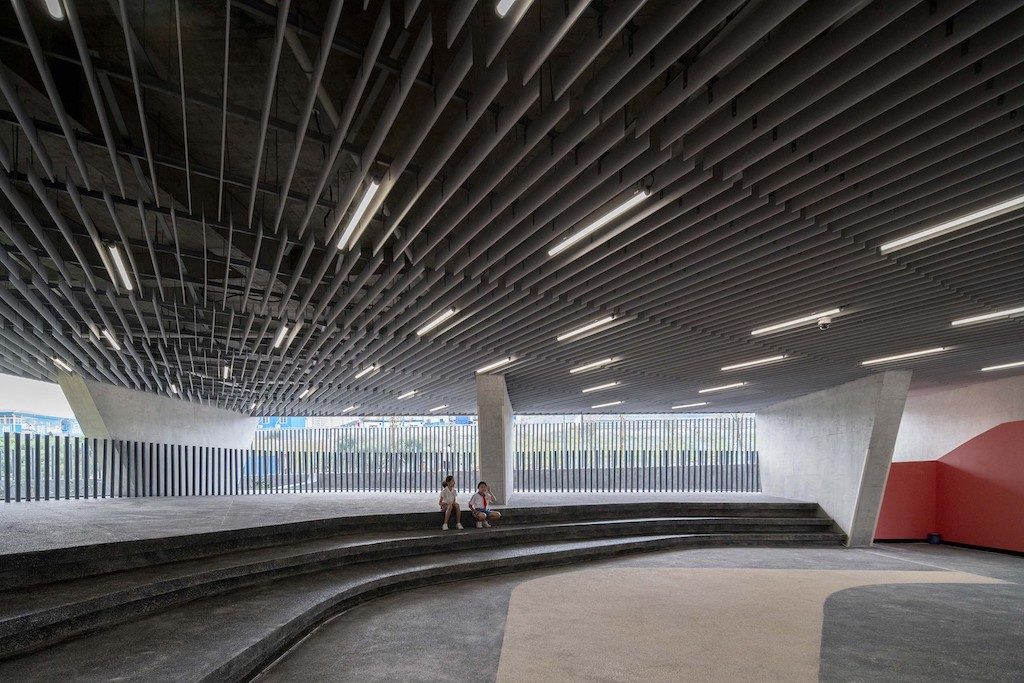 The sinking courtyard is connected to the overhead and naturally undulating ground floor through a gentle slope in the south courtyard and an open-air stepping theater in the north courtyard, altogether becoming a children’s landform park. The 200-meter circular runway and sports ground are placed on the third floor of the eastern half, linked to the second level of the main teaching building on the west side, which offers convenience for students on the second, third and fourth floors to run to the sports area. 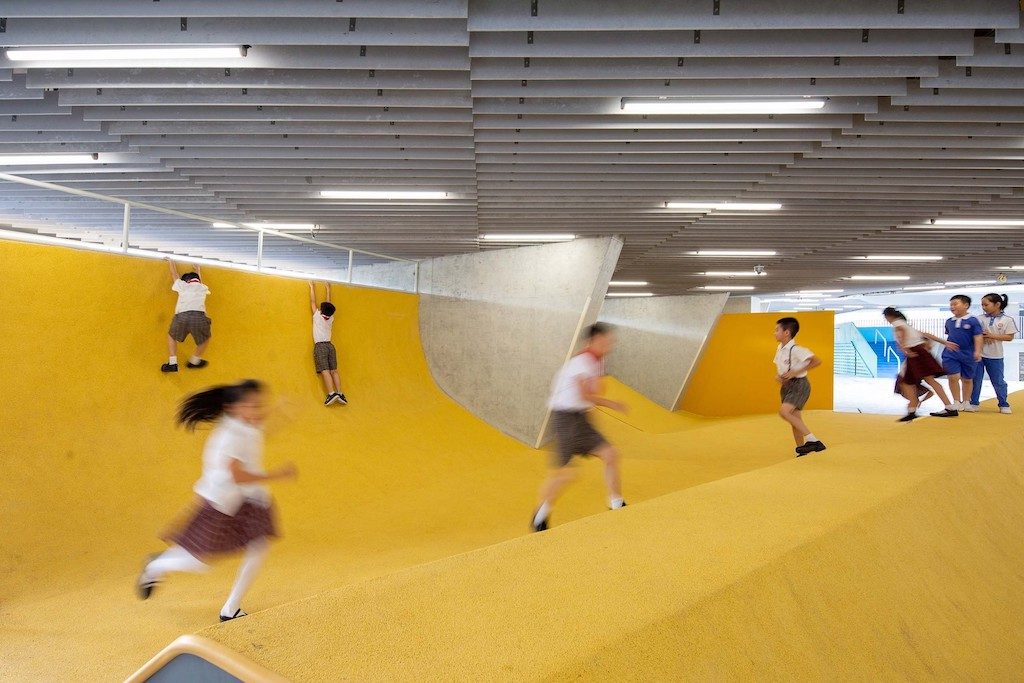 Underneath the stadium is a 300-seat auditorium, hanging above the semi-outdoor swimming pool in the landform park. The fourth and fifth floors of the west half are the extracurricular classrooms and the teacher’s office, while the roof is the school’s horticultural farm. 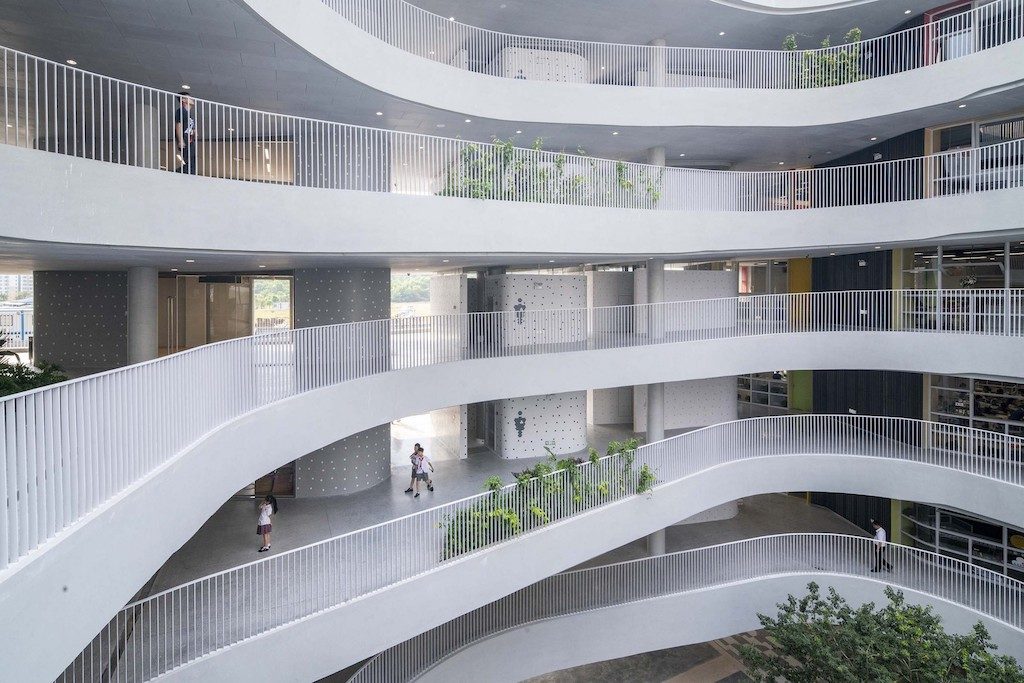 The learning unit, traditionally the classroom, is the basic spatial cell for primary school students to learn and communicate. The architects conceived separated pairs of drum-shaped learning units on the horizontal E-shaped floor plan, for the subtropical climate in which Shenzhen is located, to avoid blocking fluent ventilation on the facade. A block of 12 classrooms are divided into three rows and arranged in pairs of six. Each unit-pair combination can be flexible by opening up to join the two units, and closing to separate the two, by the moveable division wall in-between two units. 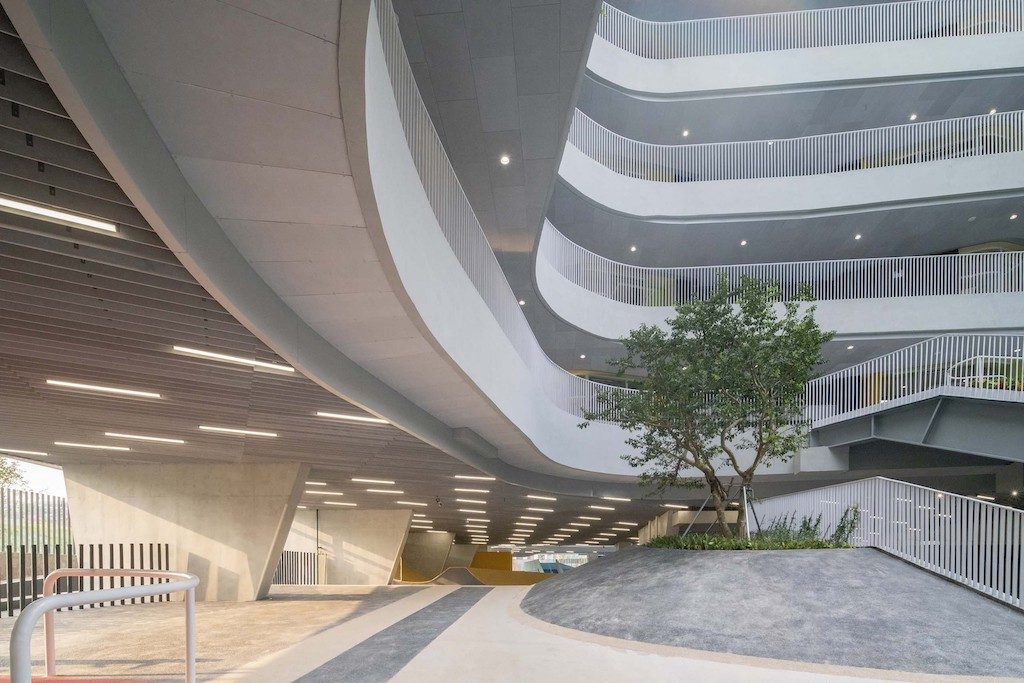 The drum-shaped plan shows greater flexibility and freedom when compared to traditional rectangular classrooms. It is also more conducive to a variety of learning and teaching patterns. The rhythmic folding curve outline of the learning units and the curve edge of the courtyard form the linear activity space to shape a dynamic semi-outdoor venue for the children.

The architects maintain and use the height difference between the north and south of the site, making 1-meter slopes to connect between the three rows of learning units on each floor and create also the landform experience on the E-shaped floor plate. In the end, two steel stepped garden bridges hung in the middle of the two “valley” courtyards, connecting the different floors of the courtyard, are adding unique viewing and gaming experiences over the “valley”. 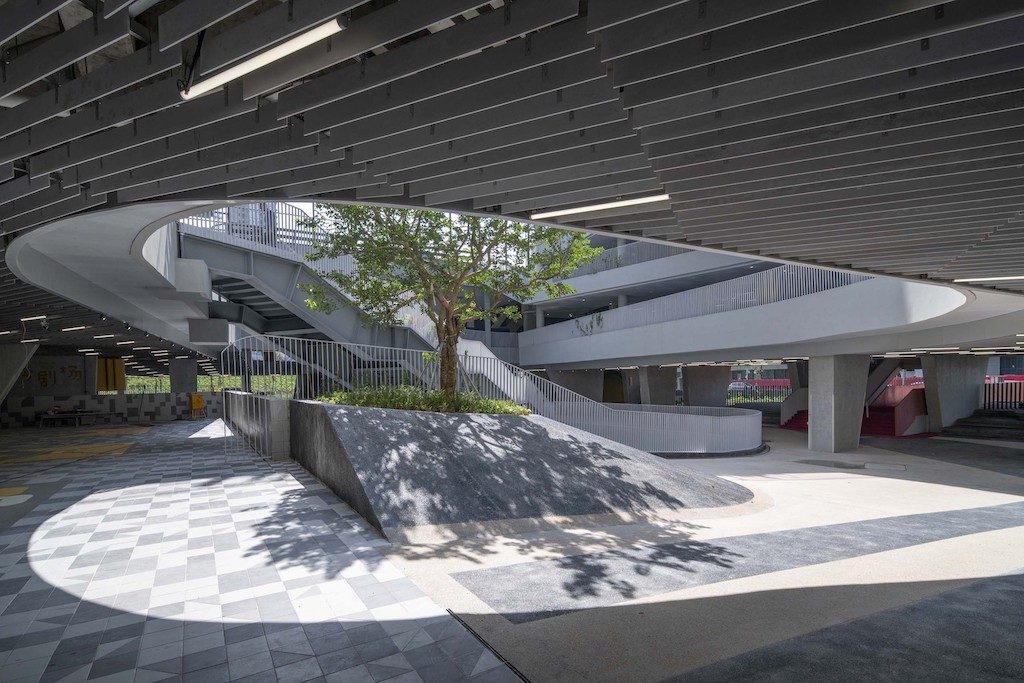 “Valley” courtyards, dynamic horizontal slabs, loose cellular fabric, and the implanted organic greening systems are the design strategies to respond to high-density urban conditions and the subtropical southern climates. Furthermore, through the process and results of the HEPS, the architects to create a new spatial typology for public facilities in high-density cities such as Shenzhen. 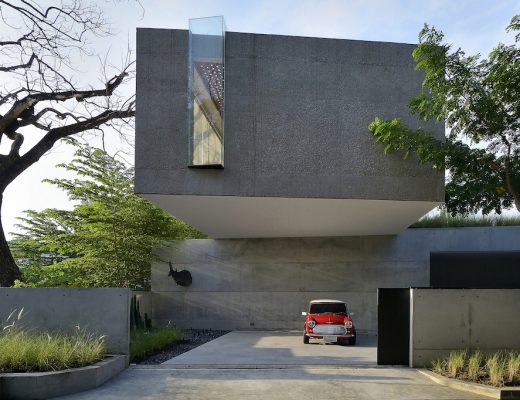 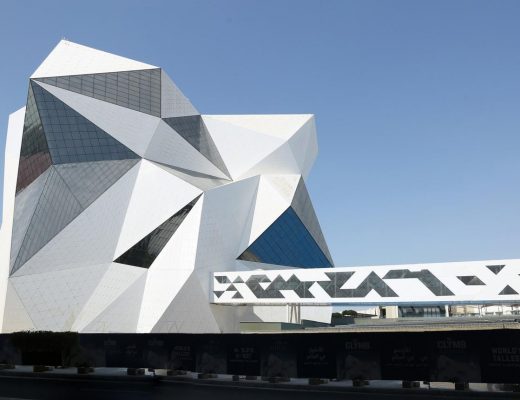 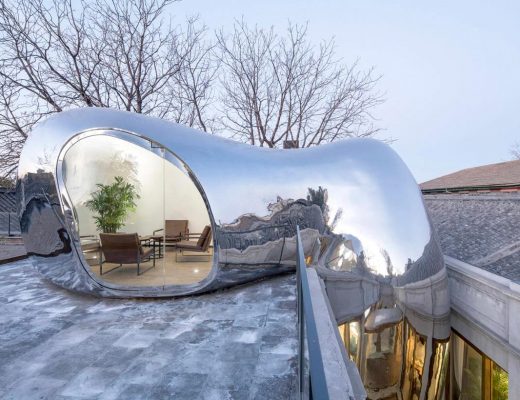