In Sidoarjo, part of Greater Surabaya satellite area, Andyrahman Architect has designed the Omah Boto (Brick House for Bhasa) residential project which strives to focus on indigenous craftsmanship. Inviting these craftsmen to be a collaborative partner during the architectural process, the objective was to get them to think like designers.

The client’s brief pointed towards questions such as “How to bring up Indonesian vibes in this house?”  The project is sited near to the Pari Temple and Sumur Temple. It references the red brick material found in abundance in East Java, which has a particularly strong association with red brick usage in architecture since the Majapahit Kingdom era (it lasted from the late 13th century to the 16th century). The materials and manufacturing techniques are inherent to the craftsmen in Trowulan Village, home to the red brick industry, and still as relevant in vernacular architecture, often with a modern interpretation as in this case.

Bricks in Omah Boto form the micro-cells of the building. The brick dimension (5x10x20 cm) is the main measuring standard for all architectural part of Omah Boto such as sill height, door or window width, and even the living spaces. It is combined with other Nusantara (old maritime traditions) elements using bamboo, wood and rattan.

In addition, some of the brick arrangement in this house is taken from Batik motifs. The Parang and Pucuk Rebung motifs are used for wall and floor brick tectonics, Kawung motif on bathroom ceramics, among many other variations.

The 13th brick pattern in Omah Boto is built with tectonic techniques that require high accuracy. The craftsmen understand the material’s character and quality innately. “Architect is the one who is famous outside. While inside, the craftsmen emerges” says Mr. Hasan, the brick project leader.

Omah Boto adopts Javanese house’s conceptual ideas. There are three main parts of Javanese house’s zoning: Pendhapa (a public or communal area in the front side of the house), Pringgitan (a transition area in the middle), and Dalem (a private area in the back). These spaces are arranged horizontally in Javanese residences. However, in Omah Boto, they are arranged vertically. The first floor is for the communal room, second floor for the living room, and the third floor for bedrooms.

Musholla (prayer room) as a sacred area in this house is a contextualisation of the ‘Garbhagrha’ / ‘Guwagarba’. It is applied in the floor, the wall, and the ceiling with brick construction. It reminds people of their origin and purpose of life in the world. The outer skin of this building is a transformation from ‘Gedheg’, Indonesian hollowed woven bamboo. It is implemented as red brick skin façade, designed to reduce glare, maximise airflow while maintaining the homeowner’s privacy. This brick tectonic also creates the fourth dimension inside the house along with daylight. 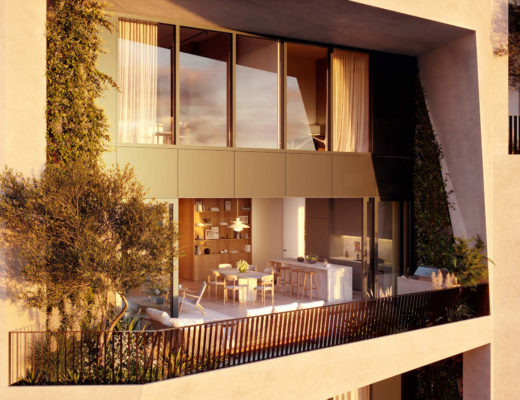